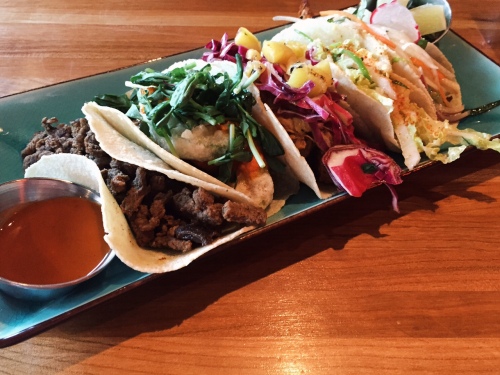 Before Dylan Elchami sold his Scotch & Sausage restaurant concept, he converted part of the space housing it into a taqueria specializing in tacos de guisados. For Elchami, it was a dream come true. For me, it was a chance to eat more tacos de guisados, a massive and unwieldy class of taco filled with homey slow-cooked stews and sauced preparations. Chorizo and papas is a guisado. Bistec en salsa de chile pasilla is another. So are chile relleno and picadillo. And this new operation, S&S Tequileria, put picadillo on the menu. Unfortunately, the kitchen’s idea of picadillo was sauceless, dry crumbles of over-salted beef. It was, in a word, terrible. The rest of the tacos ordered that day weren’t as memorable.

Then I noticed something peculiar, the Scotch & Sausage social media channels had almost no taco images. Had they realized how disappointing the tacos were? Not long after that I received a press release for Le Taco Cantina, a new taco concept taking over the space. It described the food as having a “triage of flavors” melding Mexican and Asian cooking techniques and ingredients with a little French flare. While I’m sure who ever wrote that release was trying to make the food come across as compelling as possible, the use of medical disaster terminology probably isn’t the way to achieve that goal. “Sortie” might have been better.

Shortly thereafter, the blogs began to announce the taqueria’s opening. There was a lot of oohing and ahhing because handmade tortillas and moo shu duck confit. Interesting, right? Not really. Handmade tortillas by themselves aren’t that big a deal. They’re difficult to make well consistently, and a smart taquero knows that if he can’t have them produced in-house perfectly it’s better to find a tortilleria that can meet his standards. END_OF_DOCUMENT_TOKEN_TO_BE_REPLACED

Just in case you didn’t know what this truck sold.

Fort Worth has a wealth of loncheras. They’re stationed at the far end of grocery store parking lots, they’re parked alongside convenience stores—wherever they call roll up and set a table with a few chairs. That’s where I found Taqueria Eva’s, a taco truck on the city’s Northside.

An older gentleman sat reading a newspaper in the truck’s cab as a friend and I walked up to the lonchera. As we stepped up to the ordering window, a boy young enough to be the man’s son it open, took our order and immediately set to making our tacos, working the flattop and heating the tortillas like he—a kid—was a seasoned taquero. END_OF_DOCUMENT_TOKEN_TO_BE_REPLACED

Clarendon Drive east of Hampton Road is a hodgepodge of auto shops, ramshackle churches in converted frame houses, food business, such as paleterias, Aunt Stella’s Snow Cones and taquerias. Among the latter, the newest is Tacoqueta, taking a clever name meant to lure you into the small strip shared with a hair salon. Almost as alluring is the 20 tacos for $19.99. Almost, because with only three tacos (plus weekend barbacoa) to choose from there isn’t much variety for order of that size. What there is an abundance of, though, is excellent service. The ladies behind the counter and working the griddle will answer your questions without hesitation—yes, they have fresh tortillas but only for the menudo—and charm you with a smile while they await your order.

Departing from my usual tacos-only selection, I went with the No. 1 special. The former comes with light, yellow Mexican rice and manteca-bolstered silky refried beans punctuated with minute pintos. END_OF_DOCUMENT_TOKEN_TO_BE_REPLACED 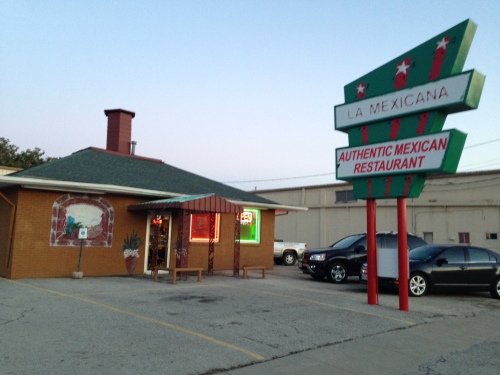 La Mexicana’s overall taco quality is difficult to evaluate. It is one of Denton’s few authentic Mexican sit-down restaurants, which means its menu is more expansive than the other taquerias we’ve visited in the city.

Its tacos are served lightly oiled tortillas and topped with cilantro and chopped onion, and of the six tacos I ordered four hit the mark. END_OF_DOCUMENT_TOKEN_TO_BE_REPLACED

A blanket of warm air wafted over me the moment I stepped into Denton’s Taqueria Guanajuato. The heavenly aroma of 10 warm cuts of meat sitting on a skillet quickly enveloped me as the door closed behind me.

This small taqueria offers the basics: carne asada, lengua, barbacoa, chicken, campechanos, chicharron, al pastor and beef fajita. It also has a few choices that I’m not used to seeing as the main course on tacos: chorizo and nopales.

One of Taqueria Guanajuato’s big advantages is that it offers tacos in both small and large tortillas. Obviously the larger tortillas cost a few cents more, but you get a more filling meal. The small tortilla option allows for variety in taste.

I admit I was eating on a bit of a tight budget, but I think I made the right call with the tacos I ordered. END_OF_DOCUMENT_TOKEN_TO_BE_REPLACED

The whistle of the A-Train blew seconds before the lady behind the counter called to us: “Quieren cebolla y cilantro?” Do you want onion and cilantro? My brother and I both responded with a childish “Si” and returned to our table, each with a plate of three corn tortilla tacos.

At $1.25 for a single two-bite taco, La Estrella’s tacos may seem pricey. But what the tacos lack in size, they more than make up for in quality.

END_OF_DOCUMENT_TOKEN_TO_BE_REPLACED

I often say I’d give up all of the restaurants in Portland-proper for those of the suburbs and outskirts. A culinary school can’t compete with Korean, Mexican, or Indian grandmas.  Though when I say that, I’m usually not thinking about chain-dominated Tualatin. The only reason I had actually stopped in Tualatin, rather than just passed through, was to go to Chocosphere to will-call high-end chocolate.  But the benefits of running a Mexican restaurant that doesn’t use Velveeta is that customers entrust their food finds to you.  And so when I heard about Ome Calli serving authentic paletas and chamoyadas, I had to go check it out.  I didn’t know then that next door I’d also discover one of Oregon’s best taquerias. END_OF_DOCUMENT_TOKEN_TO_BE_REPLACED

Today, Marshall Scott Owens (@WestTX_BBQ on Twitter) drops a guest post on the Taco Trail. The Lubbock resident is a financial adviser at a Fortune 500 company. More importantly, he likes “BBQ, tacos, burgers, and brew,” and, he says, “If college football was a food I would eat as much as I could.” You can read Owens’ guest post on Full Custom Gospel BBQ here. Before you do that, though, read his review of Taqueria Jalisco in Lubbock. It might come in handy during the Texas Tech games against Oklahoma University and University of Texas this fall.

I went to Jalisco under the guise of a “romantic” date with my girlfriend, but I was really there to review what I think are the best tacos in Lubbock.

Taqueria Jalisco isn’t your run-of-the-mill Tex-Mex restaurant. The menu tends to offer more than the typical “food smothered in cheese then ran through a pizza oven.” People commonly refer to Jalisco as Tex-Mex, but those people tend to think all Mexican food in Texas is Tex-Mex. Although I have never been to Guadalajara, I would like to think Jalisco lives up to the name, and it is anything but just Tex-Mex. END_OF_DOCUMENT_TOKEN_TO_BE_REPLACED