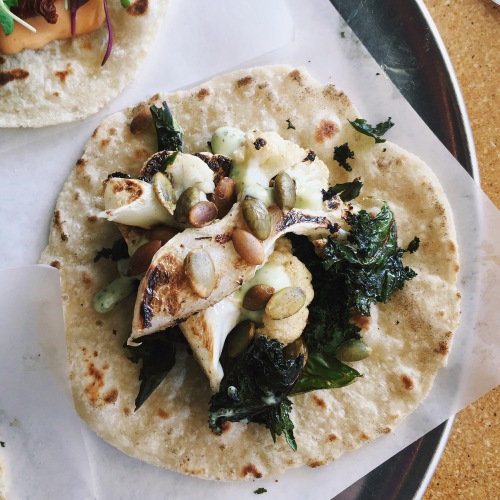 This is a taco with a handmade tortilla.

“This is Taco Country!” Those four words—painted on the burnt orange façade of San Antonio’s legendary breakfast taco haunt, Taco Haven—are carried in every Texan’s heart and stomach. They are as fundamental to the Lone Star State’s identity as Friday Night Lights, “Pancho & Lefty,” and Dr Pepper. This is true across our tortilla-based wonderland from Big Bend to the Piney Woods and South Texas to the Metroplex.

I’m not only referring to the fried envelopes whose broken shards litter much of our cultural landscape. No, I mean all the tacos: jaralillos de res, carne asada tacos smothered under a salty tarp of queso fundido at Tacos El Toro Bronco in El Paso; the ground beef-nestling airships that are Ray’s Drive Inn’s puffy tacos; the slivers of paprika-lacquered pork served across Oak Cliff; Brownsville’s many Sunday barbacoa huts; the big-city gals that love dressing up; the just-this-side-of-familiar menu at new regional restaurants; and, yes, breakfast tacos.

As part of the promotion for its 120 Tacos to Eat Before You Die issue, Texas Monthly is hosted an online reader poll to determine which Texas city has the best tacos. (Full disclosure: I’m a contributor to the editorial package, but the poll we’re addressing is all fan voting.) Ultimately, Austin won the top spot with 42 percent of the votes. The Rio Grande Valley scored a 25 percent, and Dallas, took third place with 15 percent.*

That the capital city is in first place doesn’t come as a surprise. Austin has an incredible PR machine fueled by its perceived coolness compared to other Texas cities. Austin has barbecue. Austin has SXSW. It has breakfast tacos. And, with the assistance of New York food writers who have visited Austin during a big festival or lived in the city for a spell, it’s fooled many into believing breakfast tacos are Austin-style. Let’s take as an example an article run last week by Eater Austin claiming Austin as the home of breakfast tacos. The piece by Matthew Sedacca came off as a rush job and evidence of an editorial disconnect. That same day, Eater LA published Meghan McCarron’s excellent profile of Los Angeles breakfast state mecca HomeState. In her piece, McCarron writes “Austin, Texas, is not the home of the breakfast taco, but it is the place where they became an iconic dish. … It took self-conscious, self-mythologizing Austin to turn them into a thing.” While Sedacca at least acknowledged that Texas breakfast tacos have origins across the state, he mentioned only one other city, Corpus Christi. That the city cited wasn’t San Antonio—where breakfast tacos and tacos in general are so ingrained in residents’ DNA that they’re taken for granted until Austin asserts its PR supremacy—ignited a firestorm and a tongue-in-cheek petition to have Sedacca exiled from the Lone Star State. I chuckled at the absurdity of it all. Allow me to explain why.

Breakfast tacos, or tacos meant to be consumed in the morning, have roots in the first tacos: tacos de mineros. Named after the miners who ate the rolled snacks and the rolled paper dynamite stick the workers used to blast through rock, tacos de mineros evolved into tacos de canasta (prepared tacos steamed in baskets). From there we get to tacos de guisados. In northern Mexico and the border region, breakfast tacos are sometimes called tacos mañaneros and have the same components as breakfast tacos in the Rio Grande Valley, South Texas, and Austin. It’s from the Texas-Mexico borderland that we get our modern concept of breakfast tacos, and it’s from a San Antonio food tour where we get the first newspaper mention of breakfast taco, according to Gustavo Arellano. Austin merely repackaged the food to maximize its cultural cachet and sold it to the hungry masses to consume the next Austin cool thing.

They couldn’t have chosen a shoddier foundation.

Tacos are composed of three elements: the salsa, the filling, and most importantly, the tortilla. Without a great tortilla, there is no great taco. El Milagro, an East Austin tortilleria, produces the flour tortilla most commonly used for Austin breakfast tacos. The finished product is a gummy, quick-to-cool, supermarket-grade disc used by restaurants both iconic (Torchy’s Tacos and Tacodeli) and small (Tyson’s Tacos and Pueblo Viejo). Their use fulfills the city’s obsession with all things “local.” Unfortunately, Austin’s El Milagro isn’t local. The factory is part of a national operation established in 1950 in Chicago with outposts in Illinois and Georgia. To say El Milagro is Austin local is to say Chili’s is Dallas local.

Not only is its prevalent tortilla a poor one, Austin lacks the taco diversity of Dallas or Houston. The latter two metro areas boast a Mexican immigrant population from across Mexico evident in the range of regional cuisines available. Austin is struggling to move beyond Tex-Mex and tacos of the pork, beef, or chicken variety. It’s generic at best. Even for all its influence and its incredible strides in dining, San Antonio and the Rio Grande Valley remain in much the same condition. Still, down there, handmade corn tortillas are a source of pride. It’s almost unfathomable to provide a tortilla made elsewhere.

If Austin doesn’t have the state’s best tacos, what city does? Dallas. (There is a case to be made that Houston trumps Austin too, but more on that later.) The answer surely draws snickers and rolled eyes from those in the Austin camp. Dallas is big hair, big money, big steaks, and big attitude, right? Not when it comes to tacos. Here, a handmade corn or flour tortilla is crucial. The dining public wants to know what they’re eating is fresh, and restaurateurs believe when it comes to tortillas they either go local or don’t bother.

This standard is set by restaurants such as Revolver Taco Lounge serving seconds-old tortillas and businesses sourcing nixtamalized masa or tortillas from Araiza Tortilla Factory in West Dallas, including Taco Stop, El Tizoncito, Urban Taco, and Tacos Mariachi. At the latter restaurant, Dallas’ only Tijuana-style taqueria, octopus and huitlacoche come on corn tortillas that leave behind the aroma of a cornfield on your fingers.

Even the Anglo-owned Resident Taqueria handles their default flour tortillas in-house. That cauliflower taco sprinkled with crunchy pepitas—the taco that converts haters—it has a loose, bantam base like a beloved down comforter. Corn tortillas made from nixtamalized masa are available by request and then only if the kitchen hasn’t depleted supply of masa.

When Tacodeli announced the first location outside of Austin would be in Dallas, I immediately reached out to them, recommending La Norteña Tortillas, a small concern specializing in handmade northern Mexican flour tortillas three miles from the restaurant’s location. It’s the tortilla they use now. Nearly translucent in spots, with a sweet, rich chew, it is the perfect wrap for the unassuming Otto taco, with refried black beans, bacon, and avocado combining to deliver not only sustenance but also comfort that eases you into the day.

Say what you will about Velvet Taco, but at least that restaurant—with locations in Dallas, Fort Worth, Houston, and Chicago—makes its tortillas in-house. The specialty taco spot even offers a corn tortilla made with a hibiscus flour adjunct, taking inspiration from Mexico’s mixed tortillas tradition, where nopales or huitlacoche are added to the masa.

And what of the case for Houston? The Bayou City, like it’s sister-rival to the north, has a large Monterreyan bolstered by a diverse Mexican immigrant population and an array of Mexican regional foods ready for the scarfing. However, Houston’s taco tradition is founded on taco trucks, flea markets, and Tex-Mex palaces. Still, handmade tortillas are treasured there. Laredo Taqueria #4 is just one example. There, as you lineup to order your tacos, a woman can be seen preparing masa for flour tortilla. She is focused on that one task, and you are focused on ordering only flour tortillas.

There is no such significant movement toward such a seriousness regarding tortillas in Austin.

Change might be on the horizon, though. Later this year, Luis Perez will open an Austin outpost of his superb La Norteña Tortilleria. Based in Dallas’ Oak Cliff neighborhood, La Norteña supplies many of the northern Mexican-style restaurants and taquerias with in the area. They are sweet, sturdy and translucent in spots, all the better to see the divinity in the tortillas. The factory’s shop is open to the kitchen where three woman make 1,000 tortillas per hour. A chalkboard menu lists the few foods available to-go.

Add to La Norteña’s impending expansion, the high profile of Valentina’s Tex Mex BBQ food trailer and mobile hermanita Violet Taco, with their thick, squishy flour tortillas, a style common in San Antonio. More is required. Once the Capital City improves its tortilla options and non-Texans get their eyes and taste buds treated to the joys of the Lone Star State’s true tortillas, a new hope might be born.

* An earlier version of this post appeared on Thrillist on December 17, 2015.

2 responses to “Austin Tacos (Breakfast and Otherwise) Are Overrated”