“Like most things on Henderson, it seems to be getting a little used up, or loose,” said a friend about Velvet Taco. Indeed, Dallas’ latest specialty taqueria is past its prime and revealing itself for what it really is: mediocrity wrapped in hot looks dry humping immaturity, months after its premier on the boogie Big D taco stage.

My first experience at the shop, housed in a former Church’s Chicken presaged his pronouncement.

I stuttered when the young cashier at Velvet Taco asked my name. It’s a common occurrence among those with speech impediments. She giggled while I struggled, neck muscles straining.

“Yes. I just have a stutter.” This time her giggling was uncomfortable.

My order taken, I took a stool at the bar running the length of the restaurant’s windows. The long common tables in the shop’s center were crammed elbow to elbow.

“The young lady wanted me to tell you she’s really sorry,” my dining companion told me when she joined me at the counter.” I told her you’ve had so many similar experiences you have a sense of humor about it.”

A cup of elote, tangy, complex and a strong candidate for best dish on the menu, was unexpectedly included in my order when my name was called.

It was better than the fried oyster taco on my initial visit. The taco offered scant evidence of bivalve. Most of the filling was loose, fried breading. Thankfully, on my return pillowy globules with hints of salinity, lay beneath the remoulade, pico de gallo and a slaw of Napa cabbage, fennel and radish. 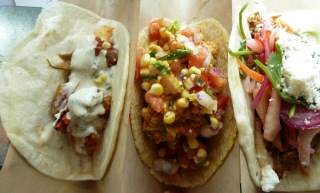 The fried chicken was little more than a chunk of chicken breast shellacked Buffalo style hidden under a briar patch of carrots and cheese on the wrong side of skunk. 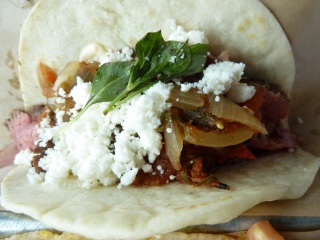 The Texas burger taco is a blatant case of plagiarism made more egregious by the fact that co-owner Mark Brezinski founded Tin Star Taco Bar, a specialty chain where the signature item is the cheeseburger taco. It’s not good there, either. And amounts to little more than a gimmick, much like one of Velvet Taco’s sister restaurants in the Front Burner Restaurant group, Twin Peaks.

The grilled adobo shrimp in a corn tortilla would have been a cloying disaster if not for the liberal application of srirachi aioli and the amalgamation of bacon, roasted corn-avocado pico and epazote.

Perplexing, even though the chili-rubbed pork is also doused with sriracha aioli, the porcine option didn’t share the heat found in the adobo shrimp.

The veg-heavy frittata with queso blanco, mushrooms, peas and chutney was a decent selection

Proving that not all is lost: the exquisite paneer. The vibrant combination of tomato chutney, Thai basil, tikka and raita with fried paneer (cottage cheese) in a fresh flour tortilla was everything chef John Franke and the owners had in mind when they conceived Velvet Taco. The bright fried calamari was a close second. Somehow, the roaring mixture of conflagrating garnishes didn’t muck up the whole.

Too bad the manner in which the tacos are presented is deficient and visible on one’s shirt and lap after the second or third bite. The zigzag-nesting job would be paired with a tray.

Also unfortunate: At 20 tacos, Velvet Taco suffers from a menu stretched too thinly—as beautiful as it looks. 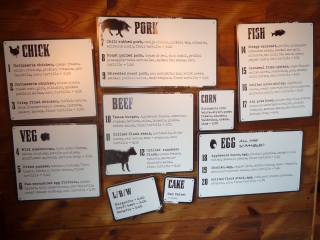 Creativity and tinkering with ingredient combinations is what every chef is charged to do, but if a chef and restaurant group wants to wow customers they need more than novelty. They need restraint. Velvet Taco’s menu strains under the need to impress with slick tricks. However, it’s awkward, noticeably so seconds after entering the building. It’s written on the wall. Velvet Taco ought to see the writing on the wall, too. It isn’t pretty.