The Tacos of Traders Village 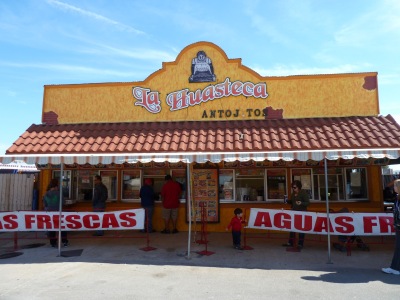 My wife was not surprised that I found a taquería, a food stand, really, within fifteen minutes of arriving at the Dallas-Fort Worth outlet of the flea-market theme park chain Traders Village. “Three tacos with rice and beans for six bucks,” I enthusiastically related after returning from my scouting mission. (There might have been some arm-waving and pogo-ing performed by someone not my three-year-old son nor my patient, age-less wife.) “Huaraches. Barbacoa de borrego, pambazos, too!” Spanish exclamations followed, and when our family friends, the Estradas, joined us, we dug in.

My buddy Rico chimed in even before one spritz of lime dotted a piece of meat. “I always lower my expectations when eating market Mexican food,” said the Mexican who once served me a crunchy taco—albeit with a homemade tortilla.

After one bite of his huarache de chorizo, Rico was surprised at the quality of the grub. The Estradas went on to relish chorizo tacos. The ground sausage filling waded in shallow vermillion juice, with a slight puckering aftertaste. Earthy and comely, the chorizo wasn’t the pie-hole of pebbles served at too many taco joints.

My family ordered the pastor combo as well as the lamb (borrego) barbacoa at La Huasteca (named after a geographically diverse region in northeast Mexico, a people and a language).

The pastor, rust-colored cubes, sliced thickly—if at all—then chopped, had a crackling surface with a bouncy interior. The pork teetered on the precipice of a salt bed, and one tortilla was an oily mess that could grease up a creaky door hinge better than WD-40. However, the pastor wasn’t bad, even if I can’t vouch for its preparation (i.e., traditionally). 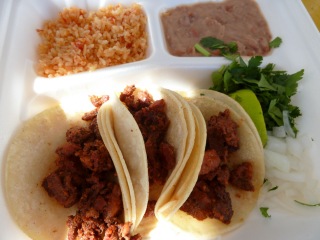 The lamb barbacoa, while exciting, was uneven. Some threads were zapped of moisture. Thankfully, the deficiency was rare. Others were soft, succulent with tinges of gaminess mild enough that my boy enjoyed fingers of the meat.

If my brio was beginning to temper, it was forcefully yanked from my insides when I wandered away from my friends and family for a bite at Burrito & Taco Grill’s satellite outpost on the far west side of Traders Village.

Both tacos, the bistec and the chicken, were mealy and under-seasoned, a sad duo, purchased for a scant $1.25 each—and about as full. 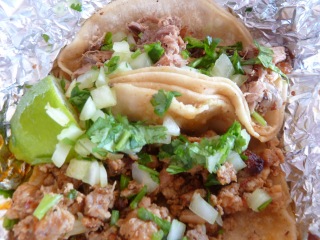 Because there will be another outing to Traders Village—the joint has kiddie carnival rides that can be ridden ad nauseum for an eight-dollar pass—I’m heading straight for La Huasteca.

One response to “The Tacos of Traders Village”