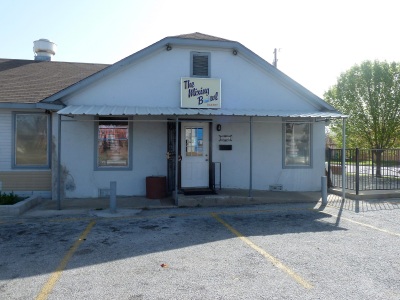 This might come as a shock: I’m crazy about breakfast tacos. The eggs and whatever (maybe just barbacoa) filling a slightly spongy, warm flour tortilla preparation is my preferred morning meal. Breakfast tacos where you don’t expect them are even better, which led me to the Mixing Bowl Bakery.

The small operation, run out of a converted and slightly dilapidated house on Hampton Road south of Jefferson Boulevard, offers simple breakfast tacos Wednesday to Friday weekly and is decorated with seemingly every implement in every Abuelita’s kitchen armamentarium. Handheld mixers, graters, mezzalunas and spatulas are crammed in next to cartoon character-themed glassware, rusty lunchboxes and mid-century tchotchkes. In Spanish, one could say, “de todo un poco,” or call it a “mezcla.”

The kitchen is visible through an opening in a wall where a coffee station is located, complete with mismatched cups. While I can’t speak to the quality of the cakes, the photos posted on the Mixing Bowl Bakery’s Facebook page show a collection of character-themed cakes (Pocoyo and Team Umizoomi) and occasion creations, ranging from cute to refined.

I was in the mood for decidedly unrefined fare, though.

After ordering a trio of tacos, I sat at a small table in the front room as a morning rush turned the quiet establishment into a slamming shop packed with chatty patrons.

The sausage, pale and chopped, was spiced-up hot dog bits folded into moist, bouncy scrambled eggs. The eggs were consistent, by the way, the best component of each taco. The bacon and egg taco contained one small slice of the porkstuff with little flavor. At least it was crispy and buoyed by the kicking salsa I doused it with. 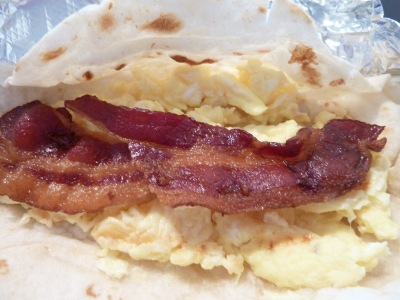 Between the other tacos, there was the chorizo, which was cooked with the eggs (i.e., the way a chorizo and egg breakfast taco should be prepared). That being so, the filling had only minute seasoning. I was underwhelmed.

For being special treats, available only three days a week, there is nothing special about the breakfast tacos at the Mixing Bowl—regardless of the outstanding eggs.