Today, Marshall Scott Owens (@WestTX_BBQ on Twitter) drops a guest post on the Taco Trail. The Lubbock resident is a financial adviser at a Fortune 500 company. More importantly, he likes “BBQ, tacos, burgers, and brew,” and, he says, “If college football was a food I would eat as much as I could.” You can read Owens’ guest post on Full Custom Gospel BBQ here. Before you do that, though, read his review of Taqueria Jalisco in Lubbock. It might come in handy during the Texas Tech games against Oklahoma University and University of Texas this fall. 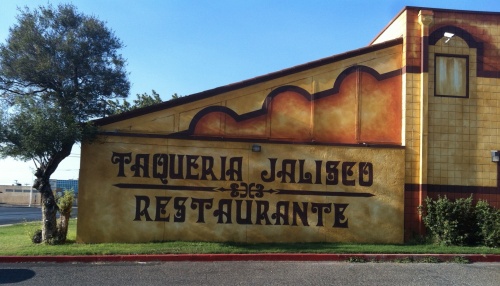 I went to Jalisco under the guise of a “romantic” date with my girlfriend, but I was really there to review what I think are the best tacos in Lubbock.

Taqueria Jalisco isn’t your run-of-the-mill Tex-Mex restaurant. The menu tends to offer more than the typical “food smothered in cheese then ran through a pizza oven.” People commonly refer to Jalisco as Tex-Mex, but those people tend to think all Mexican food in Texas is Tex-Mex. Although I have never been to Guadalajara, I would like to think Jalisco lives up to the name, and it is anything but just Tex-Mex.

We were seated and kicked things off with chips and salsa. If I wrote a food blog about Mexican food, I would always start with the chips and salsa. I hate thin tortilla chips. The chips were thick and crispy, which is how they should be. The salsa was very spicy; so much so, it may have affected my taste buds for the rest of the evening. Thankfully I had a nice schooner full of frozen margarita to help cool off my tongue. The queso was made from real cheese, and had a great flavor. I see Velveeta queso quite often in Lubbock, and something called “queso blanco” is quite trendy at the moment. I do find it odd that white people we insist on calling spicy cheese dip “queso.”

Taqueria Jalisco has a pretty hefty menu, and the tacos come à la carte for the reasonable price of $1.79. It was important for me to try three different tacos, and to try something new or out of my comfort zone.

Carne asada on a corn tortilla

The beef itself was a bit dried out. I was mostly focused on chewing the meat so I am unable to describe what its seasoning may have been. I have had better carne asada experiences at Taqueria Jalisco and would be willing to give it another go. They did use fresh cilantro and onion, all of which made the taco taste better, especially when I covered it in the cheese we ordered.

Al pastor on a corn tortilla 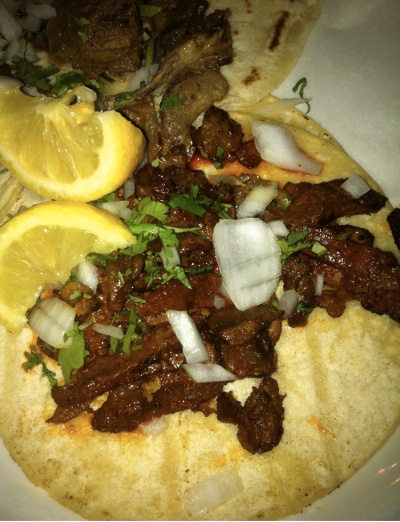 This was my favorite taco. I am not sure I have had pork covered in their mystery red sauce before, but I will definitely be ordering it again. The pork was very moist and slow cooked. This taco had the same cilantro and onion garnish, but it also came with two slices of lemon. To be honest, I wasn’t sure if the lemon was garnish or part of the dish, but I squeezed it on my taco with no regrets. I think that the lemon enhanced the flavor of the pork. Compared to the salsa the red sauce was just that, red sauce. I think it was used to keep the pork moist, and it definitely worked.

Lengua on a flour tortilla

I had never had cow tongue before, but I will definitely be eating lengua again. It tasted similar to a fajita cut of beef. The only differences I can describe are the color and the texture. The color was a lighter brown, even lighter than the pork. The texture, on the other hand, reminded me of portobello mushrooms. I spent most of my time focused on what the taco reminded me of compared to what it was.

Overall, Taqueria Jalisco puts out some good tacos. If you find yourself on the South Plains of West Texas this fall to see your favorite college football team play, the Taco Trail has a worthy stop at Taqueria Jalisco.