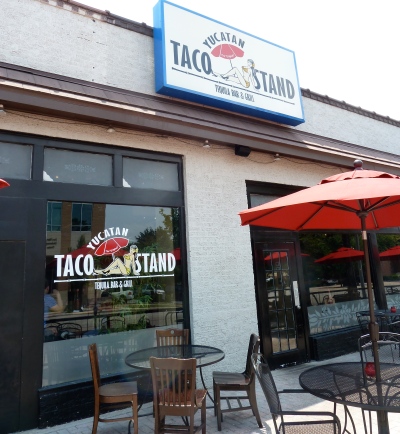 A stop on the Fort Worth taco tour a friend and I took ahead of my trip to San Diego, Yucatan Taco Stand Tequila Bar & Grill offers an alternative to Fuzzy’s Taco Shop. However, Fuzzy’s and Yucatan share more in common than what distinguishes them.

Both were founded in Cowtown, both were created by Paul Willis and both use a dubious geographical conceit. Both hedge their bets on seafood tacos. Yet, Fuzzy’s is the one that has reeled in success, crossing beyond the Texas border. Yucatan once boasted area three outposts. The Fort Worth location, the first, is the only one remaining in North Texas. Another Yucatan can be found outside Houston, in The Woodlands.

After placing our order at the front counter (something else Yucatan shares with Fuzzy’s), my companion and I sat at a window booth, watching as employees from the nearby hospital gorged on large nacho platters, loaded, edible Popocatepetls similar to the dish at Fuzzy’s.

One wall of the Fairmount/Hospital District restaurant was lined with nooks made private by white curtains. Competing with the size of the food and the din of the packed dining room was a soundtrack of Ramones, Nena and a catalog of 1980s hits.

Not as catchy as the tunes were the tacos.

The signature tilapia Original Tempura Fish Taco was compressed by a crag of salad, cilantro, tomato and cheese, something I learned during my San Diego visit is de rigueur for fish tacos. However, at Yucatan all the tacos suffered from this wastefulness.

The Ground Sirloin’s beefy crumbles were the most flavorful of the trio on our table. It was a Tex-Mex standard executed adequately.

Worse was the Tequila Shrimp, an ashy mess that actually benefited from the excessive toppings. Any tang imparted by the Mexican spirit—of which there is a healthy stock behind the bar—was lost in the filth.

And yet, all things considered, Yucatan is better than its college-going, butt burning sauce-bragging sibling.

Tagged as fish tacos, Fort Worth