I often say I’d give up all of the restaurants in Portland-proper for those of the suburbs and outskirts. A culinary school can’t compete with Korean, Mexican, or Indian grandmas.  Though when I say that, I’m usually not thinking about chain-dominated Tualatin. The only reason I had actually stopped in Tualatin, rather than just passed through, was to go to Chocosphere to will-call high-end chocolate.  But the benefits of running a Mexican restaurant that doesn’t use Velveeta is that customers entrust their food finds to you.  And so when I heard about Ome Calli serving authentic paletas and chamoyadas, I had to go check it out.  I didn’t know then that next door I’d also discover one of Oregon’s best taquerias.

Las Casitas has a large menu with not only tacos and other antojitos, but a modest selection of mariscos and soups. 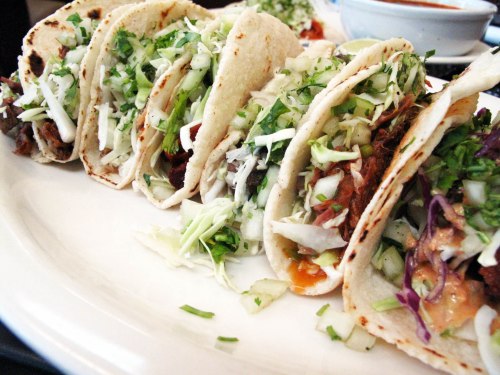 But their griddled and fried meats aren’t far behind their stewed ones. The carne asada is salty with a nice crust, yet is still tender and moist. The pastor is saucy and well-balanced between savory and sweet. The carnitas are tender and moist with some caramelization.

Even their fish taco is pretty good. It’s Baja-style with, basically, a fish stick covered in a creamy sauce, but it’s a respectable version. The only taco that truly falls short is the “suadero” which is ground beef here. It should be called picadillo, but even for a picadillo it’s rather boring.

The tortillas are big, pillowy, white corn and handmade. Their flavor is mild, but they’re strong enough to hold the ample portion of meat in each one. All the tacos are topped by default with cabbage, onion and cilantro.

Salsas are another weakness. They’re average and you wouldn’t do much worse with Herdez or Embasa. If you dine in, they do give you free chips and salsa. While the chips aren’t good, the chunky tomato sauce with the chips is better than average.

You can order the consomme from either the birria de borrego or the cabeza. They make very flavorful, light soups with onions, cilantro and garbanzos in the broth. They also serve menudo on weekends and have caldo de res.

They also offer a soup I hadn’t had before, elopozole. Whereas most pozole includes nixtamal—Mexican-style hominy—this one includes fresh corn, both on and off the cob. Otherwise it’s very similar to a red pozole with a chile-based broth and chunks of braised pork. This one also had squash. It was an enjoyable rendition of the dish, perhaps a bit more sweet from the fresh corn than most.

Their ceviche tostada is Guerrero-style with lots of ketchup. If you can get past Mexicans’ penchant for ketchup on seafood, it’s a good version. There are big chunks of lightly-cured shrimp mixed with tomatoes, onions, and cucumbers, topped with avocado.

Las Casitas is an excellent taqueria, one of the best in the Portland area, and a good challenge to deep Southwest’s most-commonly-named favorite, Sanchez. It doesn’t hurt that right next door is Ome Calli.

Ome Calli means “second home” in Nahuatl, the language used by the Aztecs. If this paleteria serving up Mexican ice creams and other frozen treats was closer, it might become my second home. The menu has four types of frozen treats: helados (ice creams), nieves (sorbets), paletas (cream- or fruit-based popsicles), and chamoyadas. All are good.

Flavors for helados, nieves and paletas run the gamut of what you’d find in Mexico and rarely find in any typical American scoop shop.  Some favorites:  strawberries and cream, coconut, pine nut, guava, tamarind, tamarind with chile, mango, mango with chile, and passion fruit. Mamey is another favorite of mine. The fruit itself looks like a big, brown avocado with orange flesh and an almost-black pit.  It tastes like a pumpkiny sweet potato and makes one of the world’s great ice cream flavors.  They also make corn ice cream. For some reason, while Asians and Latinos have figured out that corn makes for an excellent dessert flavor, Americans still think of it as merely the non-green vegetable their kids will eat.  If Haagen Dazs or Cool Moon ever sees fit to make a corn ice cream, I’ll have to buy a new wardrobe.

The only items lacking are some of the fruit paletas, such as the guanabana.  While the nieves have pieces of the fruit, the same flavors for the paletas are often made with just the juice and end up being too subtle.  In Mexico, there are always lots of chunks of fruit and even the seeds with something like guanabana or guava.  I think they worry gringos may find it inconvenient.

The last of the frozen treats at Ome Calli are the chamoyadas.  Chamoy is a condiment made of pickled fruit and chile that’s sour, sweet, salty, and spicy.  It’s often used in candies and on fresh fruits.  A chamoyada is a chamoy slushie or shave ice (raspada).  Here they have two rotating flavors of chamoy-enhanced slushies and serve them in tall cups with various candies and toppings, often with a paleta in the middle.  It’s overkill.  Sweet, salty, sour, spicy and delicious overkill.