An Interview With Steve Sando, Owner of Rancho Gordo 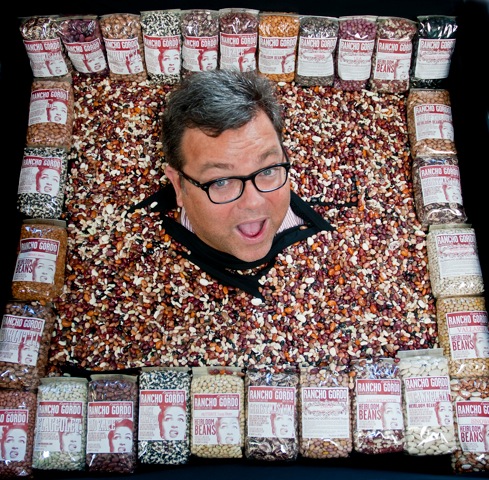 I first met Steve Sando online.  His passion for Mexican food was apparent.  I didn’t need to look into his eyes to see it. The love of Mexican culture and Mexico itself spilled onto the screen. I met him in person for the first time at the Ferry Building Farmers Market in San Francisco. He was hawking beans and I’d been given requests by Portlanders aplenty to mule some back north.

Since then, Steve has taken the lowly bean from a neglected legume to superstar-status ingredient. Sando’s company, Rancho Gordo, grows, imports and promotes heirloom and heritage varieties while working directly with consumers and chefs like Thomas Keller, Deborah Madison, Paula Wolfert and David Kinch.

Sando’s seed saving, bean production, and marketing efforts provide professional and home chefs with heirloom beans that would otherwise have been lost to history. The beans, along with corn, chiles, and tomatoes, have become key ingredients in the new American food revolution centered in Sando’s native San Francisco Bay Area. In fact, Sando and Rancho Gordo were named number two on Saveur magazine’s “The Saveur 100 list for 2008.” Bon Appetit magazine declared Sando one of the Hot 10 in the food world of 2009. Food + Wine magazine placed Steve “at the forefront of the current seed-saving movement.”  Steve’s two books are  Heirloom Beans and The Rancho Gordo Bean Growers Guide.

He now grows more than 25 varieties in California and works with small indigenous farmers in Mexico to import their heirloom beans for the U.S. market. He lives in Napa and travels frequently throughout the Americas.

Taco Trail: I use your beans at Mi Mero Mole, as you know, for frijoles charros. One time I ran out and tried regular pinto beans. I ended up giving the soup away rather than selling it because it was so much worse. It doesn’t even seem to matter which bean of yours I use for the soup.  It turns out great with every variety I’ve tried.  Why in the hell are your beans so damn good?

Steve Sando: My first guess would be that they’re fresh, as in less than a year old. I don’t want to tell you how old some commercial beans are. It’s not right. There are variations within pinto beans, but they are a very light colored bean and only get darker as they get older. You really want to eat them within two years if you can.

This will sound ridiculous, but most everyone at Rancho Gordo loves beans and none of us would tolerate an inferior product at this point. If there were problems, or even if beans were lackluster, bells would go off long before the problem got to me, let alone the consumer.

TT: Is there a region of Mexico with especially interesting or diverse beans? If so, what are some favorites and why? END_OF_DOCUMENT_TOKEN_TO_BE_REPLACED

I often say I’d give up all of the restaurants in Portland-proper for those of the suburbs and outskirts. A culinary school can’t compete with Korean, Mexican, or Indian grandmas.  Though when I say that, I’m usually not thinking about chain-dominated Tualatin. The only reason I had actually stopped in Tualatin, rather than just passed through, was to go to Chocosphere to will-call high-end chocolate.  But the benefits of running a Mexican restaurant that doesn’t use Velveeta is that customers entrust their food finds to you.  And so when I heard about Ome Calli serving authentic paletas and chamoyadas, I had to go check it out.  I didn’t know then that next door I’d also discover one of Oregon’s best taquerias. END_OF_DOCUMENT_TOKEN_TO_BE_REPLACED

While Mexico City may not have New York’s skyscrapers, it’s every bit as big — bigger — and its people every bit as busy. Urban life doesn’t always allow for a home-cooked meal. So in DF, the home-cooked meal has come to the street in the form of tacos de guisado. END_OF_DOCUMENT_TOKEN_TO_BE_REPLACED