“Meet and Eat” is an occasional—rare, really—series about adventures and discussions with food writers, chefs, restaurateurs and others orbiting the food world.

The Park Cities/Upper Greenville area has a new breakfast tacos destination: Digg’s Taco Shop. The Hillcrest Avenue restaurant opened across from Southern Methodist University in February 2011. But only recently did the good, comfortable joint that bills itself as influenced by the Austin music and taco scenes begin serving breakfast tacos.

So, why did Digg’s chef Richard Rivera and business partners wait until Sept. 24 to offer breakfast tacos?

END_OF_DOCUMENT_TOKEN_TO_BE_REPLACED

“Meet and Eat” is a series about adventures and discussions with food writers, chefs, restaurateurs and others orbiting the food world.

In response to my not-so-favorable review of Velvet Taco, co-owner Mark Brezinski invited me to tour the restaurant and spend some time chatting with he and chef John Franke. I accepted Brezinski’s offer and last week visited Velvet Taco before the lunch rush.

Highlight of the tours included stuffing of my maw with the new Weekly Taco Feature (WTF) special, The Blue Pig (slow-roasted pork, avocado crema, fire-roasted salsa, custom pico, Danish blue crumbles and pickled Fresno chilies). The liberal application of blue cheese meant I picked out chucks of it, but the pork butt was moist.  END_OF_DOCUMENT_TOKEN_TO_BE_REPLACED

Filed under Knox-Henderson, Meet and Eat 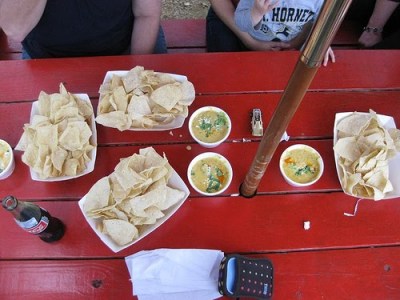 Photo: qrosec, Flickr
“Meet and Eat” is series about congregations and adventures with food writers, food bloggers and others orbiting the food world.

I want to be proved wrong when it comes to Texas. The relocation to Jessie’s native state, influenced by the birth of our son, being laid off and desiring a larger family support network, has had a few hiccups. I’ve been wrong before (i.e., tacos). Now I’m wrong about chile con queso, which I lambasted on Slashfood. I’m certainly not apologetic about my story. How can I regret it? The post led me to break bread with fantastic Austin food writers/bloggers who gently pointed out the obvious: I was wrong.

Addie Broyles, food writer for the Austin American-Statesman, commented on my queso post. She essentially dared me to not change my mind. I took that bet. On a drizzly Sunday afternoon we set upon the Tochy’s Tacos truck on S. 1st Street. In attendance were Addie, her son in tow, Baconator, Quani, John Knox, Kristi Willis, Carla Crownover, Jennie Chen, who invited me to sample the choice beer at Live Oak and (512) a few days later. (Did I miss anyone?)

Torchy’s chile con queso was substantial. It didn’t flop off the chip in an ectoplasmic splat. It contained chunks of avocado and chiles and a cilantro garnish. I hadn’t expected the zing zang zoom on my tongue, the lilliputian flavor circus on my palate. This was not the dreck I’ve uneasily swallowed across the state. This was food. This was…. Más, por favor!

What struck me more than the surprising queso were the surprising people. Here were folks open to others’ ideas. Folks who didn’t take personally everything this New Yorker said. Folks unlike most others I’ve met here. Austin gives me hope, makes the move to Texas non-regrettable. Austin and its people have helped me discount what I was once told by a Texan, “Be careful what you say, lest you insult someone. You might not like what happens next.” What a welcome! What a terrible thing to say about your own kind! I come from a place where disparaging your own kind, be it New York or ethnicity, is as beloved as baseball. In other words, temper your pride, kids. But I don’t want this to be a referendum on Texans because, as another Texas food writer once told me, “the food and the people are related.” With surprising food come surprising people.

Filed under Meet and Eat, Texas

“Meet and Eat” is series about congregations and adventures with food writers, food bloggers and others orbiting the food world.

Recently, I had the pleasure to go on a taco tour with Roberto Espinosa, owner of Tacodeli, one of Austin’s stellar taco emporiums. The meet-and-eat was a product of one of my Slashfood posts, Where are America’s Best Tacos? – Brooklyn’s Sunset Park vs. Austin, Texas, and the subsequent conservation Roberto and I engaged in. For the piece I compared a selection of Austin taco joints with those of my former home, Sunset Park, Brooklyn. Among the establishments was Tacodeli and included quotes from the taco tsar. While I did enjoy what I ate at Tacodeli, I had reservations (what I called “gringo fancy” and recanted in a follow-up post.). Roberto was understanding and offered to take me on a tour of Austin’s taco offerings.

There was no hesistation. I took Roberto up on his offer. And away we went.
At Rosita’s Al Pastor, a truck in a strip-mall parking lot, we had lengua, al pastor, carnitas and chicharron. The hit and miss were the lengua and the chicharron. The former melted refreshingly, like an ice cube on the tongue during a steaming New York City summer day when the  air conditioner isn’t working. The chicharron, well, let’s just say, I’ve never had the pleaure of sampling a delectable chicharron taco.

“Don’t eat that. Seriously, you don’t want to eat that,” said Roberto about the fried tripe taco we had ordered at Taquito’s. Of course I took a bite, a big one at that. And, of course, he was right. A regrettable decision that had the texture of hard plastic and left the taste of silly putty in my mouth.

Our last stop, Piedras Negras, was a truck I had been to before, and has a menu most closely resembling the taco joints I frequented in Brooklyn. As much as I wanted to eat my carnitas standby, I went with the al carbon taco. It was an against-type choice, with sauteed onions and raw onions, tomatoes as well as green bell peppers. Crunchy and juicy, I wanted to ingest it in its entirity, but after more than a dozen tacos, I apologized to it.

Between destinations we talked about Mexican food and tacos, natch; Austin; cyclicing (we’re both enthusiaists); and, most importantly, why open a taco restaurant in Austin. A Mexico City native, Roberto told me that his decision to open Tacodeli was influenced by his desire to eat what he grew up eating. “There wasn’t anything like it in Austin; it was all steam-table stuff. I wanted to cook what I wanted to eat.” Now, after 10 years, he has two shops, with a third set to open next year. Then there is the Doña Maria salsa, a creamy, neon-green sauce concocted by one of Roberto’s original—and current—employees from Veracruz. “When I opened, I asked my staff to bring in some salsas. Doña Maria brought in something she learned to cook in Veracruz. I was blown away. It was like opening a treasure chest.” Everyone I’ve met who has tasted the salsa swears fealty to it. I’ve never been one for spicy foods, but I have to agree with the loyalists: Doña Maria makes some delish salsa. Roberto obviously reciprocates his customer’s feelings. “I have a responsibility to my customers.” Note, the homemade mole taco suggested by one patron. His passion for tacos and diners is as infectious as the Doña salsa. Whenever I go to Tacodeli the shop is filled elbow to elbow and the pay-off disintegrates any claustrophobia you might have.

I can’t wait to munch on some Tacodeli grub when I return to Austin for Thanksgiving. The Cowboy and Mole tacos are calling me. Who wants to join me?