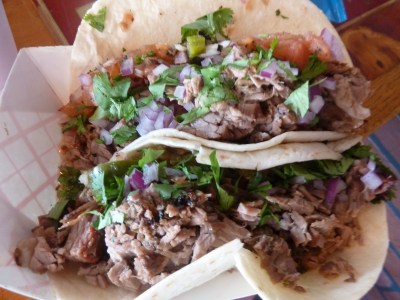 The aroma saturating Lockhart Smokehouse is like the sweetest of dreams brought on by the coolest of pillows. And I dream of Lockhart Smokehouse. When a lunch date is arranged, my impulse is to recommend Lockhart. If friends mention dinner plans, I lust after the mammoth Shiner Platter sampler.

Opened in February 2011, the Bishop Arts District barbecue joint has a gilded pedigree. Co-owner Jill Grobowsky Bergus is the granddaughter of Edgar Schmidt, owner of Kreuz Market, after he purchased it from the Kreuz family, in Lockhart, Tex. (His sons run it now.) With co-owner/husband Jeff Bergus, pitmasters Tim McLaughlin and Will Fleischman and the rest of the staff, Grobowsky Bergus has helped stoke a BBQ renaissance in Dallas—brisket taco included.

But the brisket taco offered periodically at Lockhart isn’t just griddle-topped sliced brisket, devoid of much flavor aside from that imparted by a seasoned cooking surface. No, it’s Lockhart’s signature oak-smoked Black Angus brisket spilling over the edge of the flour tortilla. There’s a little smoke ring, here. There’s some crust, there. Damn fine stuff.

The flour tortilla certainly had the substance required to conduct the snack to my hungry maw. However, it also had splintered hard edges and a tepid center. Those drawbacks flitted away each time my palate encountered filling edged with crust. Salt and smoke were cushioned by tortilla, cilantro and a peppery, rough-chopped house-made salsa, uniting Texas culinary traditions to a quiet delight.

The brisket taco at Lockhart would be improved not by a better tortilla, by definition an unpredictable flatbread with a house fly’s lifespan, but with a sibling: a taco of ground Kreuz sausage cooked in egg and blanketed in yellow cheese, much like the breakfast favorite.