Is Chi’Lantro BBQ Coming to Dallas? 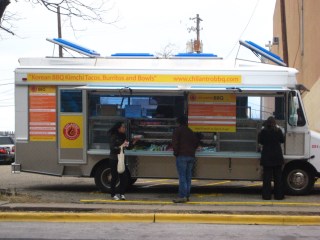 My favorite Korean taco truck in Austin, Chi’Lantro BBQ, will be rolling out a truck in Dallas sometime next year, according to SideDish’s food-truck maven, George Lewis, who tacked on the claim at the end of his weekly truck schedule post.
This is a surprising but welcomed development, as Chi’Lantro owner Jae Kim told me in a July 13, 2011, correspondence that a Dallas truck was a goal, a long-term goal. “We would love to go to Dallas but we have been busy here in Austin. We think Houston will come along before Dallas, but serving at Dallas would be awesome someday!” (Chi’Lantro had a presence at last year’s Art in October Block Party.)

Anyway, taking Lewis’ bait, I reached out to Kim, who confirmed the news. “Our plan is to open up in Dallas next year sometime in the middle of the year,” he noted. Kim and company believes there’s room in the Metroplex’s fusion-taco sandbox for Chi’Lantro, alongside Ssahm BBQ, Kor-BQ and Goghee to Go. “There’s an opportunity for us to share our food with people in Dallas.”
I’ll put that opportunity in my mouth.