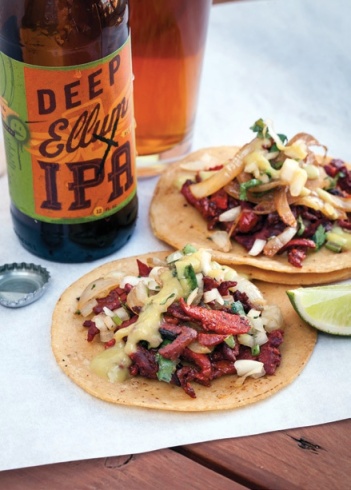 Authors note: I wrote the backpage “Quench” essay for Imbibe Magazine’s Texas issue, the first issue dedicated to the drink culture of a single state. My contribution explores taco and beer pairings. To read more from the issue click here.

After my wife and son, I have two great loves—tacos and beer. For my food blog, Taco Trail, I’ve eaten at hundreds of taquerías and Mexican restaurants in my adopted hometown of Dallas and across the United States. Meanwhile, I’ve logged countless hours at beer bars and craft breweries.

Texas is the land of the San Antonio puffy taco, the breakfast taco, and the fried-to-order crispy taco, known as the taco dorado south of the border. In the Lone Star State, tacos stuffed with lengua, suadero, barbacoa, carnitas and other fillings are sold in gas stations, from walk-up windows, from kiosks, in check-cashing shops,  everywhere. And if you insult another Texan’s favorite taco spot, by saying something like, “Fuel City tacos are trash,” you’re spoiling for a fight. Texans are sensitive about their tacos. Yet somehow—in Texas, at least—craft beer isn’t typically found in the best taco joints. While the craft beer movement has been steadily gaining traction in Texas, the last few years have seen a major growth in markets like Dallas. Last December, in a public ceremony complete with bridesmaids and groomsmen, a local cheesemonger even married a beer (Peticolas’ imperial red ale, Velvet Hammer, which is admittedly a great catch). END_OF_DOCUMENT_TOKEN_TO_BE_REPLACED