An Interview With Claire Weissbluth, Director of “Lonche: A Tale of Two Taco Trucks” 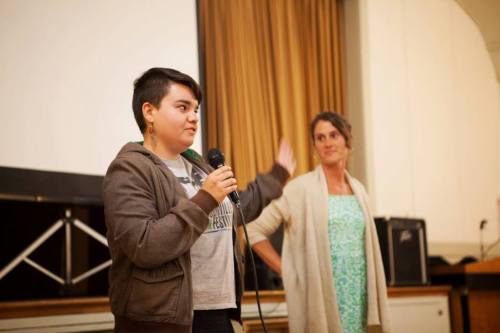 If you read this blog, odds are you have a favorite food truck, taco or otherwise. It might be a lonchera, a taco or catering truck, or it might be a slick, gourmet rig. And that’s fantastic. In most cases, you’re supporting a small business. These mom and pop operations deserve support. We at the Taco Trail, we’re partial to immigrant-owned concerns. Documentary filmmaker Claire Weissbluth shares our passion and sees beyond the quick-service tacos and kimchee fries. She sees the people. She see their stories, stories paved with sacrifice on the road toward the American Dream. Her latest project, Lonche: A Tale of Two Taco Trucks, features a truck servicing field laborers and a first-generation American immigrant’s  gussied up take on Mexican cuisine. It’s a stirring short that doesn’t take the easy way out.Weissbluth, who also goes by the moniker La Osa (The Bear), took time between film festivals to answer our questions.

Taco Trail:How did you come to be a documentary filmmaker?

Claire Weissbluth: I think I became really interested around 2004 when all these Iraq war documentaries started coming out. Although I was only in high school at the time, they made a big impact on me. I appreciated the critical perspective that they presented that I wasn’t getting through other mainstream media outlets. I went on to study Film and Latin American & Latino Studies at Hampshire College, and I became fascinated by using film as a medium to tell stories and to shed light on social issues.

TT: Your films show a love and respect for Latin American culture. What’s the source?

CW: Well, growing up in California it’s hard not to acknowledge and respect Latino culture because it is just so present everywhere and so vibrant. I live in the Mission District of San Francisco, which is full of amazing colorful murals and street art, not to mention so many great restaurants and taquerias. Often the first time that people are introduced to other cultures is through food, and in my case that’s definitely true. Although I’ve never been to Central or South America I’ve come to love pupusas, ceviche, empanadas, etc. I have been to Mexico a couple of times and was so touched by the warmth and generosity of the people I met. I also spent time in Cuba making my last documentary and I was very impressed by their creativity and resilience.

TT: From Lonche‘s trailer alone, the viewer gets and get a sense of the picture’s power and passion. Why did you want to share this story? END_OF_DOCUMENT_TOKEN_TO_BE_REPLACED