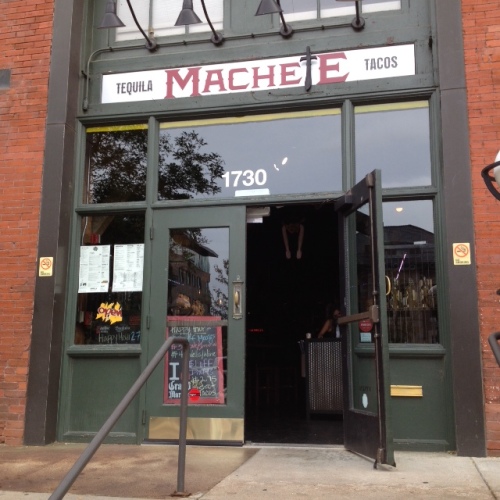 Denver may be better known for its burritos, but the Mile High City has its fair share of tacos, both famous and traditional. You might have heard of Pinche Taqueria. Or breakfast taco joint Moontower Tacos opened by a former Austinite. Dallas-based Rusty Taco also has an outpost in nearby Aurora, Colorado. Or Taqueria Mi Pueblo, serving everything from lengua and tripe to, yes, burritos.

Due to a busy schedule during a work trip to Denver, I was unable to visit any of those taco joints. I did, however, get to squeeze in time at the second location of Machete Tequila + Tacos.

An upmarket spot serving creative yet traditional tacos from chef José Avila, Machete’s flagship opened in the Cherry Creek neighborhood in 2011 and quickly garnered praise. The Lower Downtown branch across from Union Station fired up its kitchen this year. It was also on the receiving end of critical and popular response.

It’s easy to see why. 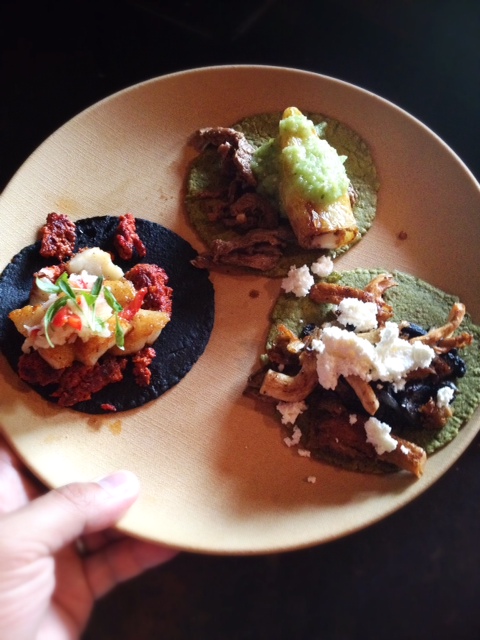 There was time enough for three tacos.

Machete’s tacos are a fetching lot with earthy foundations evoking the popular perception of the food’s humbleness served in a setting taking full advantage of the trendy Dia de Los Muertos and other folkloric aspects. The street-style small tortillas are handmade in standard and adjunct varieties with seemingly exotic but quite classic fillings. The pile of scallop and chorizo with pickled veggies on a squid ink tortilla accommodated crimson chunks of pork sausage below the shellfish with its touch of brininess.

The arranchera and queso Oaxaca-stuffed chile guero combo topped a tortilla mixed with poblano. If the tortilla offered any spice or flavor, the rising heat of its cousin, the chile guero packed with queso Oaxaca, masked it. The cheese imparted a cooling counterpoint to the chile’s kick to the back of my throat, aided with a bath of potent salsa verde.

But the one taco that should have bowled me over with earthiness, the bramble that was huitlacoche and oyster mushroom option with liberal dose of sticky queso fresco garnish and a poblano tortilla base, was actually the least so, leading me to question whether the corn fungus delicacy was fresh or canned.

It should be noted, though that my meal at Machete was by no means disappointing or unfortunate. I would go back during future Denver trips, but not before hitting the aforementioned restaurants. There are plenty of other tacos I’m curious about, especially the Del Jardin (Spanish for “from the garden”), a chef-inspired vegetarian option. I could stand to add more vegetables to my diet.