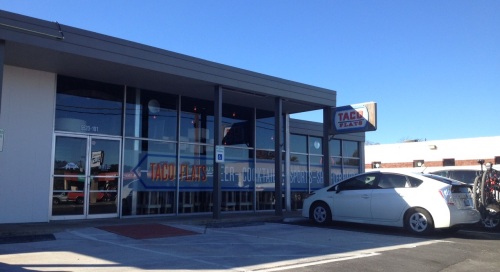 Taco Flats was the taqueria I most anticipated in 2014. Named, with permission, after a legendary Austin bar and rock club, the business from owner Simon Madera, a Rio Grande Valley native and restaurant industry veteran, opened in November. It has become something of a craft beer bar-modern taqueria along a stretch of Burnet Road that is becoming a taco hub. The taqueria is in the same strip center as the brick-and-mortar home of fancy lonchera Peached Tortilla and a short walk from Fork and Taco, which has an Uchi alumnus in its kitchen. Fork and Taco is an admirable restaurant that understands the importance of the handmade tortilla, but this is a review of Taco Flats, not Fork and Taco. That post is forthcoming.

As I mentioned, the wait for Taco Flats’ opening was worth it. From the moment you open the door, you know you’re in for something different.

The first thing to welcome you is a stuffed and mounted boar’s head on a wall of horizontal blue spectrum. But past the vestibule is a contemporary bar with plenty of dark varnished wood, a happy list of Texas craft beers, including Dallas’ own Deep Ellum Brewing Co., and a shuffleboard table in front of the kitchen pass.

A taco twofer at Taco Flats.

Sit at the bar end closest to the kitchen for a peek of Taco Flat’s prized treasure, a trompo bearing adobo-dressed pork destined for the best tacos al pastor I’ve had in Austin. To be clear, I mean legitimate tacos al pastor, the small parcels filled with crimson-colored pork marinated with a combination of chiles, achiote and citrus juice that is roasted on a vertical spit — not the red stuff that spent maybe a few hours in a hotel pan and then came to temperature on a griddle before drying out in a warming drawer. There is loads of that, most of it sad. It’s taken me five years of intense hunting to find something of Taco Flats’ caliber in Austin. The meat’s deep flavor spiked with heat from the salsa verde and a tart-sweetness from cubed pineapple. Spots of char break it up. At its base, a rough and bumpy handmade tortilla. These are the makings of greatness.

Unfortunately, the pirata, a northern Mexican taco of beef and cheese, isn’t as stellar as its cousin. At Taco Flats, the beef is three fat slices of fajita. The cheese used is Jack Cheese stained yellow from the meat’s juices and flattened to one side on a decent handmade flour tortilla. The taco is brick. The broken ring of onion and slice of chile did nothing to help. Neither would have the promised refried black beans missing in my order. I would have liked to have seen the beef and cheese fully integrated with one another. Skip the chile con queso too. It’s nothing special. Instead go straight for a pint of locally brewed beer and a couple of Austin’s best tacos al pastor. Have yourself a taco and beer party of joyful proportions.