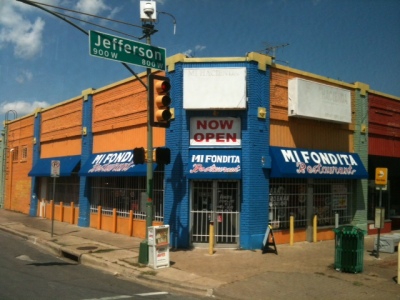 The yellow, peach and blue restaurant at Jefferson Boulevard and Tyler Street isn’t shy about advertising its daily specials, whether on the windows or a sidewalk board on which the deals are scrawled in permanent marker. Prominent among the announcements is that the flour and corn tortillas are made by hand—not in a press. By hand.

“Platters only,” the woman explained as she patted her hands back and forth demonstrating the method used to shape the tortillas. Unfortunately, I hadn’t ordered any entrées and she told me this nugget of critical information as I was paying my bill.

I knew I should’ve ordered the rajas con queso, I thought to myself. Better yet, another of the house specialties, like quail, grilled or fried with optional salsa roja. The pozole, a hominy stew believed to have originated in Michoacán state, the homeland of Mi Fondita’s owners, was also tempting.

Handmade corn tortillas would have made enjoyable tacos stellar tacos, especially the deshebrada, a diminutive selection tinged scarlet and that elicited beads of sweat at my temples. The chorizo at Mi Fondita is about as perfect as it gets in Dallas—handmade tortillas would make it unquestionable—a throat-coating spicy and nutty antojito far from the desiccated pebbles wrapped in cracked (yet greasy) yellow corn tortillas so often accepted as classic.

My barbacoa was a velvet rendition punctuated by fat—good—but it flirted with mildness. Although my first bite of the lengua was dominated by gristle, the remainder of the taco was a grassy delight.

I had intended to choose the asado de puerco, another of Mi Fondita’s signature dishes, and thought I had. However, when I asked the women who had brought the order to the table, she corrected me. Oh well. Not having the asado in my initial meal gives me cause to return to Mi Fondita, housed in a former hair salon, that and the rajas. I must have rajas.