Get me talking about tacos and see me light up like a child who receives the exact gift he wished for Christmas morning. From their history and folklore to their variability, there is much joy in tacos. In no particular order, these are the tacos that brought me that joy in 2014.

A plate of tacos at Los Torres.

Taco de Barbacoa Roja Estilo Sinaloa at Los Torres Taqueria
Unlike the barbacoa commonly available in Texas, this specialty of Sinaloa (where the Torres family has roots) is a mix of beef and pork, dark red from chiles colorados and fragrant spices. It’s always included in my order at Los Torres, where homey braises and handmade tortillas band together to give Dallas it’s best taqueria. When you visit the little spot in Oak Cliff—and you will—resist the urge to order tortillas de maiz hechas a mano. Go for the thin, nearly translucent handmade flour tortillas characteristic of Sinaloa.

Taco de Barbacoa de Cabeza at Gerardo’s Drive-In
The table-hushing barbacoa at Gerardo’s on Houston’s east side is among the best I’ve had in Texas yet. It’s silky and full, though delicate, and pulled directly from the cows’ head. My visit to Gerardo’s included a kitchen tour from Owner José Luis Lopez—Gerardo is his son—who obviously has pride in his work. He propped the cow heads for photos taken by the crew I was running around Houston with that morning, amigos in food J.C. Reid and Michael Fulmer, cofounders of the Houston Barbecue Festival, and photographer Robert Strickland.

Taco al Pastor at Taco Flats
Austin isn’t a taco al pastor town. It’s strength resides in breakfast tacos and Tex-Mex. So this killer version of the undisputed king of tacos on a housemade tortilla from Taco Flats, a new Burnet Road bar with taco-focused pub grub came as a surprise. Sit at the far end of the bar for a view of the trompo. 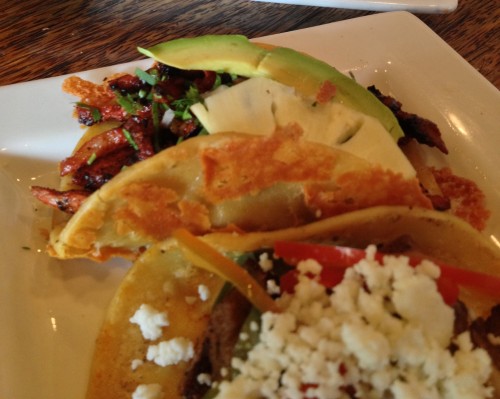 Taco al Pastor a la Tuma at Urban Taco
Take the already excellent taco al pastor at this Uptown spot, place it atop cheese on a flattop griddle, fry that cheese to the point that it adheres to the tortilla, but don’t forget to tuck inside sneaky, spiky jalapeño, and finally relish this post-nightclub street taco—or three. Three is a respectable order.

The Jose and Fish Tacos (and the Escamoles) at El Come Taco
After time working at restaurants like Café San Miguel and Revolver Taco Lounge, Luis Villalva, with the help of his family and friends, opened El Come Taco in 2013. The menu was sparse at first, but Villalva soon expanded it to include two of Dallas’ best vegetarian tacos and the occasional exotic-for-most-Texans offerings. Sure, the taco al pastor at El Come is great, but I only order it if the trompo is fired up and spinning. But I always get the smooth black bean, queso fresco and avocado taco named after Luis’ father, José, and the squat fish taco. If available, the tacos de escamoles, filled with ant larvae cooked quickly in garlic and butter, is rich and gone in a flash as fast as the flick of a taquero’s wrist slicing from a trompo.

Tacos Rojos at Morales Restaurant
One of at least two Huastec restaurants in the Dallas area, Morales is hidden in plain sight in a Westmoreland Road shopping center between an old-fashioned barbershop and a Fito’s location. Here the specialty is the gargantuan banana leaf-wrapped tamal of the Huastec region, known as the zacahuil, along with a few other antojitos indicative of the area. Among them is a platter of tacos rojos, tiny parcels of tortillas red from the inclusion of chiles in the masa with your choice of filling that are buried under a pile of lettuce, queso fresco, tomatoes, and sliced, tender potatoes supported by piles of chorizo. Homey, messy and more than satisfying, these are a required order along side plates of zacahuil. 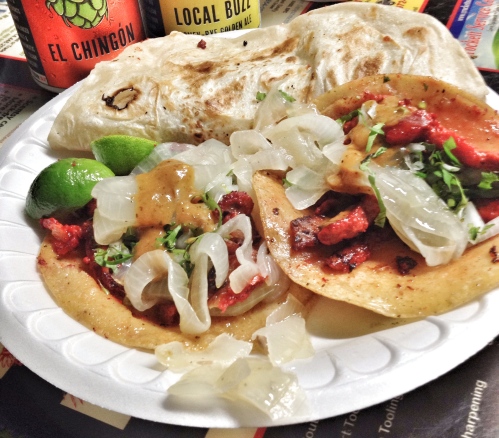 Tacos de trompo and a gringa at Dos Primos Tacos.

Tacos de Trompo at Dos Primos Tacos
These small bites ruined Monterrey-style trompo tacos for me. As a matter of fact, the greasy discs topped with paprika-forward-marinated pork sliced from Dos Primos‘ vertical spit, given a sprinkle of cilantro and chopped raw onion and then laced with throat-kicking chile de árbol salsa, pretty much typify the style.

Black Bean Breakfast Taco at Mi Madre’s Restaurant
A sloppy combination of black beans, egg and orange cheese, the black bean at Mi Madre’s is a hearty salty option that tops the classic migas breakfast taco. The beans themselves aren’t mushy at all. Rather, they are al dente and often slip through the net of cheese struggling to retain the contents in the tortilla.

Puffy Taco at Ray’s Drive Inn
My preferred first stop in San Antonio is the puffy taco institution of Ray’s, opened by Ray Lopez in the mid-1950s the dark, ramshackle joint is where younger brother Henry learned the puffy taco ways before opening his own, equally institutional restaurant. While there are several filling options, go traditional with ground beef and when the platter arrives at your table scarf the cumulus light treats as quickly as possible. Their lifespan is blink-short.

Barbacoa de Borrego Estilo Hidalgo Taco at Sanchez Panaderia y Taqueria
Mistakenly called Barbacoa Estilo Hidalgo, Sanchez Panaderia y Taqueria, a cinderblock building in the Lake June area of South Dallas, specializes in lamb barbacoa prepared in the style of Hidalgo state. Whether the lamb is pit-cooked in the traditional manner or the steam-pot modern way depends on who you talk to. Nevertheless, the herbaceous, tender meat has barely any gaminess. It’s a treat. Available Saturdays and Sundays, the only days Sanchez is opened, the dish is ordered by the pound and comes to the table in an ornate chafing dish. Handmade tortillas, garnishes and salsa accompany the meat. Adventurous eaters can also order pancita, essentially a Mexican haggis. Whatever you request, arrive early—Sanchez gets crowded as toward lunchtime—bring cash, start with a bowl of consommé and, if sensitive to sound, perhaps some earplugs. There will likely be a band performing in the tiny structure. Don’t let the prospect of not being able to hear your dining companions deter you from checking out Sanchez, though. It’s worth it.

Prawn Head Taco at Revolver Taco Lounge
Not one to let a good thing go to waste, Gino Rojas, owner of Revolver Taco Lounge in Fort Worth took the prawn head used for presentation purposes on a crudo plate a friend and I devoured, saying only, “I’ll be right back. There is something I want to try.” In what seemed only a moment, Gino returned with a long platter bearing two tacos of the same chile-soaked prawn heads resting on a bramble of micro-greens atop tortillas so fresh touching them burned our fingers. At Revolver time is an essential ingredient. So is seafood. Michoacán, the name of the Mexican state, from where the Rojas clan hales, translates to “Place of Fishermen” in English. And this whim of a crustacean taco was another reminder of not only the gift this mod taco spot in Cowtown really is, but also why I time and again consider Revolver Taco Lounge the best taqueria I’ve been to yet in Texas.

What were your favorite tacos of 2014? Share them in the comments section and have a happy new year.

Filed under Austin, Best of, Dallas, DFW, Fort Worth, Houston, one of the freaking best, Reviews, San Antonio, Tex-Mex, Uptown