December is for curling up on the couch with family, a pint of heady stout in hand, Bing Crosby’s seasonal standards competing for aural real estate with the proclamations of lovestruck teenagers tipsy from sneaking sips of Grandpa’s eggnog—“Hey, look, we’re under the mistletoe! You know what that means?”—emanating from the next room and for recollections of Christmases past, not to mention tamales. Tacos, not really. So, before I get anymore yuletide happy and completely forget about tacos, I’d like to offer a list of my 2011 favorites (i.e., those that kept me up late because I was pondering their insides).

An esteemed colleague of mine believes the best tacos come from carnecerias (butcher shops). Thanks to the cabeza at (below, right) La Norteña Food Mart, I believe it to. Cooked for hours by owner Baldemar Martinez, the cabeza taco is a capital taco where de todo un poco parties on your tongue. It’s succulent (that one’s for you, Joe Flowers).

On that subject: You have two choices when faced with a taco wrapped around a cut of whole lengua: run or lap it up. I chose the latter and couldn’t be happier for it. Now the only Dallas taquería with the name El Guero, this gas-station shop serves them up as excellently as the original on Bryan Street, recently rechristened Tacos LaBanqueta. 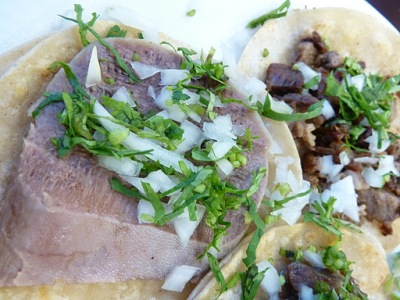 The deafening belligerence of my son could not distract me from the blessed pastor at this Upper Greenville Mexican restaurant. Shaved thickly then cubed, each piece of pork has a charred and a tender side made all the more fantastic with sweet, caramelized onions and cubed pineapple. 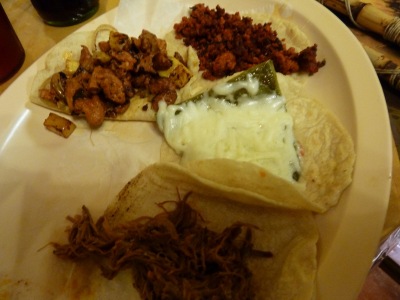 When the Korean taco craze came to the Metroplex, it did so almost dead on arrival. K-Mex food truck Ssahm BBQ has stabilized the vitals of the culinary fusion with quesadillas and kimchi fries that offer fiery comfort food and a knockout daeji taco with bulgogi pork. The slightly kicking meat is blanketed by kimchee, a sesame-soy vinaigrette-dressed slaw and the required garnishes of cilantro and onions, finally finished off with a gochujang-based salsabefore you finish it off.

Beet at 3 Men and a Taco

I loathe beets. Nay, I hate them. The disgusting, vegetable the color of dried blood is as revolting as things get for me. But the beet taco at globetrotting specialty-taco truck 3 Men and a Taco is surprisingly delectable, especially in its fried form, a dorado. The victual, composed of the said edible root, rosemary and julienned carrot tossed in balsamic vinegar, is a tasty on-the-go snack. 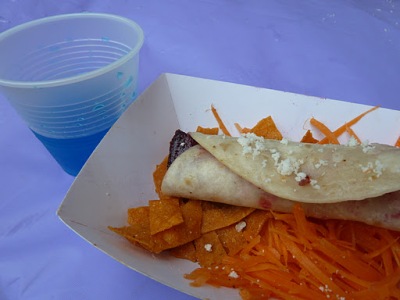 Damn! This is a place I dream about the most (a full, even more glowing review to come). When I pass a taquería on my jaunts around the city, La Nueva is the first thing that comes to mind. (The next thought is something like, “I wonder what the carnitas are like?”) Guisados (stewed preparations) dominate the menu at this tortilla factory. And everything. Everything is phenomenal here. The guisado verde, mole and rajas con queso not least among the lot. All in house-made tortillas.

Southern breakfast in a breakfast taco. This taco, stuffed with sausage, biscuit, eggs and gravy, gets you going in the morning while simultaneously clogging your arteries. This Good 2 Go Taco standard reminds me of the hangover helpers I consumed while at college in North Carolina but astronomically better, not to mention worse for you. Unfortunately, no image is available. I huffed down the stuff before I remembered to snap a picture.

Now it’s your turn. What are your favorite tacos of 2011?

Filed under Best of, breakfast tacos

One response to “The Taco Trail Top Tacos of 2011”