The combined power of tacky cartoons and cracked white paint can be resisted for only so long. Galindo’s packs that powerful one-two punch and it successfully lured me in one gloomy afternoon.

My dining companion and were instructed to sit wherever we’d like in the empty L-shaped and chose a booth across from the kitchen’s swinging doors, the better to see the goings-on. But nothing. The doors were opened twice while we were there: once after the waiter took our order to the kitchen and then when our order was brought to the table.
Before receiving the onslaught of tacos, we had a chance to peruse the menu. Aside from the typical Mexican fare, including accessible tostadas, barbacoa and tortas, there was an abundance of Tex-Mex selections. Among them, crunchy chicken tacos and a chimichanga.
Plop came the tacos.
The chorizo taco was redolent, with most of the other tacos sliding ever deeper into leathery depths. However, the tortillas were handmade discs with a modest chew and a freshness that almost made up for the blanched carnitas. Still, there was no helping the dehydrated lengua, even with the house-made salsa roja, a crushing blend of Chinese jalapeño, canned tomato sauce, onions and garlic. The chicken was unsurprisingly dry. (Will I ever learn?) 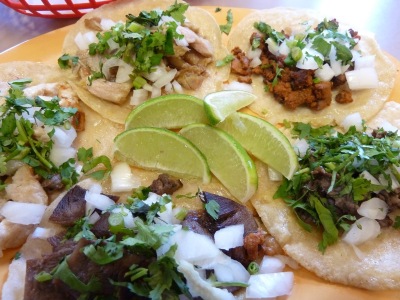 Hope was found in the pastor, which had the appearance of chorizo, in its fine dice presentation. It was fantastic: trace of sweetness danced around the occasional crunchy bit. Meanwhile, the carne asada offered a little tenderness and juiciness, which wasn’t a bad way to end an uneven meal in a desolate room. If only the entire experience was as entertaining as the exterior.
Galindo’s Mexican & Seafood
5724 Abrams Rd.
214-696-4480