This past Saturday, Feb. 23, three other men and I—with at least one casualty to National Margarita Day—set off for Fort Worth and its tacos. Our first stop was the Swiss Pastry Shop, a local institution opened in 1973 and owned and operated by Hans Peter Muller, son of the founder. Servers were scurrying about slammed after the first of two days of Cowtown races. Racers and their friends and families were grubbing down on hearty breakfast and lunch fare, while those waiting for a table were ogling the pastry cases, where Hans’ specialties including Swinkies and the Black Forest Cake waited for the likes us.

We were there for a day of tacos, among them the dessert tacos that I joked on Twitter Hans should create. A month later, the several of cajeta cheesecake cream, applewood-smoked bacon and candied jalapeños in a chocolate-dipped almond praline shell gems were ready. Rich and messy, kicking and sweet, the dessert tacos were as far from the Klondike Choco Taco as you could get—and fantasti! I had two at the shop, some mind-quieting flourless Black Forest Cake, as well as a Fort Worth Cheese Steak sandwich—sliced and grilled smoked ribeye with Hatch chiles and queso blanco—with three dessert tacos to go. Some chorizo and egg breakfast taco in a hand-rolled flour tortilla was thrown in for good measure. It was 11 a.m. Roadrunner Eats, Robert and Hans were off. 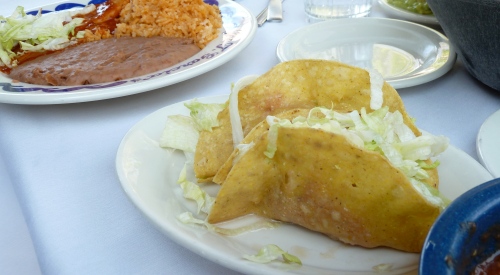 From the Swiss Pastry Shop, we set off for Joe T. Garcia’s Mexican Restaurant, another Fort Worth landmark and the reason I went crosstown. Roadrunner Eats wanted my take on the food there. Food he doesn’t much care for, to put it politely. The sliver of enchilada I had was terrible. Its red chile sauce tasted like it had turned. The crispy taco with a shell fried earlier that day was decent but a few more minutes and the soggy bottom would’ve succumbed to weight of the mild beef and sweet tomato salsa wedged inside the yellow envelope. 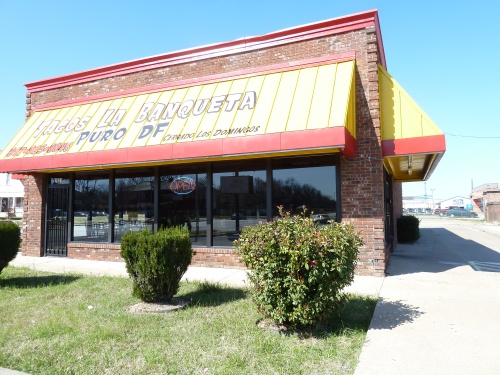 Next on the itinerary was the Fort Worth branch of La Banqueta, one of my favorite taquerías. I was looking forward to this stop, having run across the site before it had opened and only last weekend having the opportunity to dine there. We ordered two of everything, including a fried tripe, the signature suadero and a taco de cabeza given a chunk of beef tongue with papillae. Hans described the latter as “the taco that tastes you back.”

The newest location of the North Texas DF-style chain is as excellent as its predecessors. 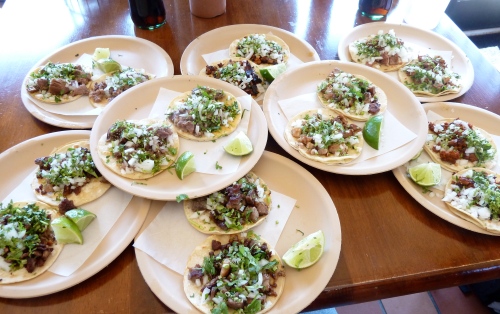 As we paid our bill, the waitress asked why were taking photographs of the taco, because, she said, “the cook said she would’ve made them prettier if she knew were going to take pictures.”

At Revolver Taco Lounge, our final stop, we all but ate our way through the taco menu, among the selections were lobster, duck, huitlacoche, arranchera and carnitas, a specialty of the owners’ native Michoacan. The guys and I were also treated to a knockout ceviche of hamachi in aguachile salsa and a shot of microgreens, in a container that billowed smoked when opened. Briny, piquant and smooth, the ceviche ranks as one of the best I’ve had. Luis, the manager, then took us to the back of the restaurant to the open kitchen where we were treated to a tortilla-making demonstration, fresh tortillas we were instructed to sprinkle with salt before eating, as well as a runny egg-filled quesadilla. It was exquisite. 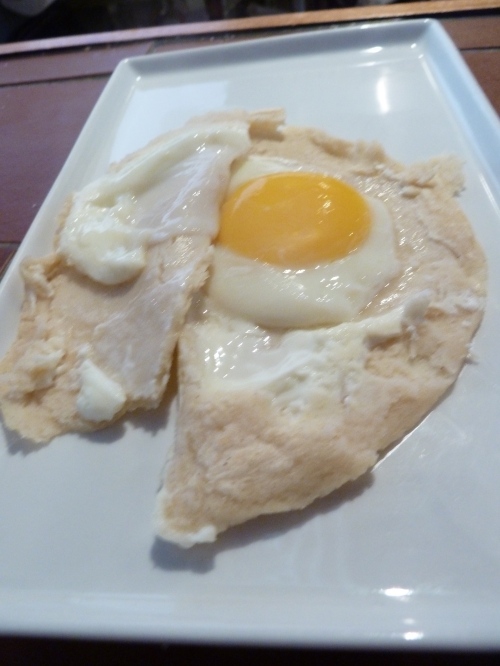 From La Banqueta’s Mexico City-style tacos to the sleek offerings of Revolver Taco Lounge, how wonderful to experience so many forms of Mexican food in one day. I strongly encourage you to check out both spots. Of course, save room for Swiss Pastry Shop. You can’t leave out Swiss Pastry Shop.

One response to “A Fort Worth Tacoventura”