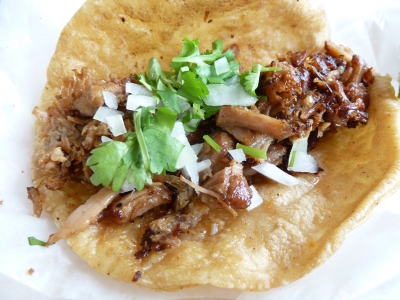 Nearly two years ago, the corner unit at 525 E. Jefferson Boulevard, formerly a furniture store, had windows blocked by craft paper and a sign promising El Pueblo was coming soon. I watched for months as construction progressed until the restaurant was ready to serve customers and—for some unknown reason—waited a few more months to visit the restaurant. I shouldn’t have done that. I had deprived myself of a worthy addition to the east end of Jefferson, one offering marvelous carnitas tacos. Why I waited until now to write a review is anyone’s guess. El Pueblo is one of the few Mexican restaurants I patronize often and have made it a stop on a taco tour of East Jefferson joints, just for its carnitas.

Every bite of the pork fried in lard was crunchy, salty and silken, a sight to behold in soft, bumpy yellow corn tortillas fresh enough to make a destructive oil bath unnecessary. Staring down at the strips of mahogany, sienna and black coursing through the filling it was obvious, here was taco beauty. If only the tortillas were fluffy and irregularly shaped handmade rounds. 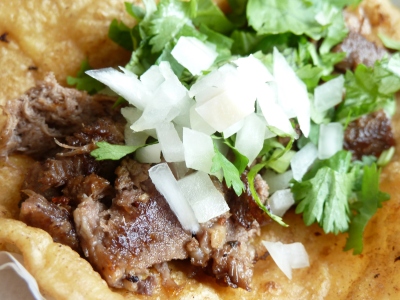 The lengua taco’s flavor hinted of being cooked in the same delightful substance that launched the carnitas toward absolute perfection, interrupted with creamy right angles of fat and crust. 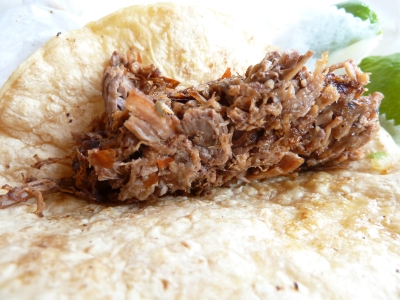 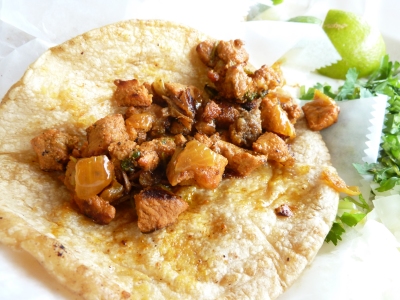 A chile-speckled rendition of barbacoa was amped up by cool salsa verde and a spritz of limejuice. The charred, cadmium-orange pastor with pineapple and onion was a pleasant counter to the carnitas and lengua, while the chorizo was a sunset-red collection of sausage. It’s a fine way to end a meal at El Pueblo, home to superlative carnitas.