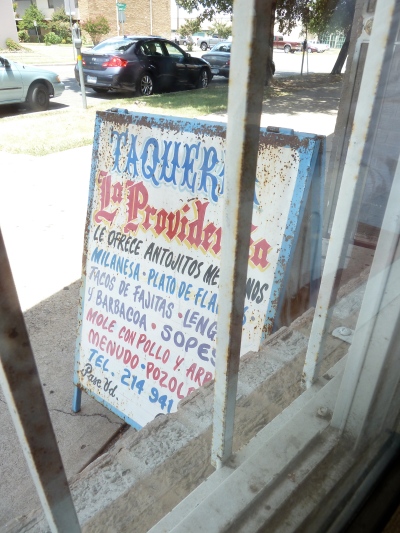 Just off the Jefferson Boulevard taco corridor on Madison Avenue is Taquería La Providencia, a restaurant decorated with baubles, athletic trophies and Mexican folk art. It’s easily missed, but once inside customers find a mixed bag of tacos seasoned with sonorous telenovelas.

The pork skin pushed back with stout, squishy bits. A few of the pieces clothed in sauce the color of the sky above a steamy landfill had cubes of meat attached to them, making it some of the best chicharrones in Dallas.

On the other hand, the chicken fajita was a pale, desiccated batch with browned specks like sunspots on an octogenarian. La Providencia’s poultry option can be added to the long list of bad chicken tacos in Dallas. It’s important to go into eating chicken tacos with the excitement of the Texas Rangers’ mid-season record but prepared for the playoff letdown.

In place of carnitas were mahogany-hued cubes of varnished meat I struggled to swallow made all the more torturous by the decent house-made white corn tortillas.

The lengua, given a quick chop, revealed delicate layers in a cross-section, It was a soft and breezy for a divisive cut of meat, giving the hesitant eater an approachable option.

Between the dismal carnitas and the remarkable pork skin was the barbacoa, a gnarled—and refreshing—mess of juicy meat.

Yet, I keep returning to the chicharrones. I certainly didn’t see that coming.