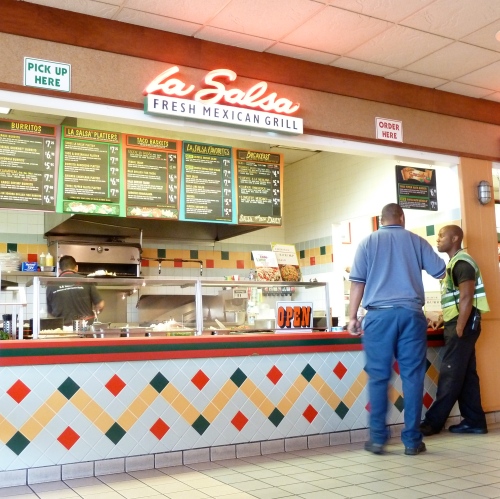 I had originally wanted to post a review of one of the fish taco shacks I patronized during my week in San Diego. However, as impressive and disastrous as the local specialties were, what became apparent while I was in SoCal for my best friend’s wedding was my how formidable is my love of Tex-Mex, especially when it comes to queso and breakfast tacos. My craving for the former was particularly shocking. I’ve not experienced those feelings until visiting San Diego. Not new to me was the gloomy nebula produced by a dearth of breakfast tacos.

So, one morning, the groom and I conducted an Internet search for the Tex-Mex beauty. The one result we found had so many negative reviews, my buddy immediately nixed the possibility of eating there. Another opportunity didn’t present itself until after the wedding and my responsibilities as the best man had ended. It came on the day of my departure for Dallas at the San Diego International Airport.

La Salsa Fresh Mexican Grill’s airport location sits inside a small food court in Terminal 2. The Irvine, California-based chain specializes in Mexican-inspired and Cal-Mex dishes. Baja-style shrimp tacos share menu real estate with burritos bigger than a newborn puppy as well as a taco salad. Fajitas give La Salsa some Lone Star appeal; there are outposts in Austin and Houston.

Like all airport fare, the goods at La Salsa are overpriced. The two breakfast-tacos plate is listed at $4.25, including eggs topped with feeble salsa roja in corn tortillas. The chorizo I added upped the cost by $1.25. Substituting flour tortillas was also extra. When given the option, I like to add cheese to my breakfast tacos. That was another price increase. Finally, I ordered a drink, stopping the damage at $9.29.

Inside the gummy, tortillas, cold where they didn’t make contact with the filling, was a chorizo-egg mixture as under-seasoned as legroom on my Spirit Airlines flight is crushing. The cheese gave the other elements the saltiness needed to make a sad go at flavor.

As if to compensate for the charge and disappointment, my meal came with a basket of chips that were doughy in the center. Six runny and tepid salsas were offered at a separate bar. All were inadequate. Thankfully, the beers I later consumed at the airport’s Karl Strauss Brewing Company bar were fantastic.