Between the railroad underpass and Singleton Avenue on Sylvan Avenue and among the seemingly abandoned, dilapidated warehouses in an industrial section of Oak Cliff sits Reveles Panaderia, whose parking lot is packed with pickup trucks each morning.

One rainy afternoon, hoping Reveles also sold tacos, a couple of friends and I walked into the little Mexican bakery and gazed at dessicated taco fillings next to pristine pastries under banners for C.D. Guadalajara (aka Chivas), the soccer team for Jalisco state’s capital city. Aside from the potato and chiles, the only decent-looking options were the puerco en chiles colorado (pork in red chiles) with potatoes as well as fajitas, shimmering green peppers and translucent onions included. 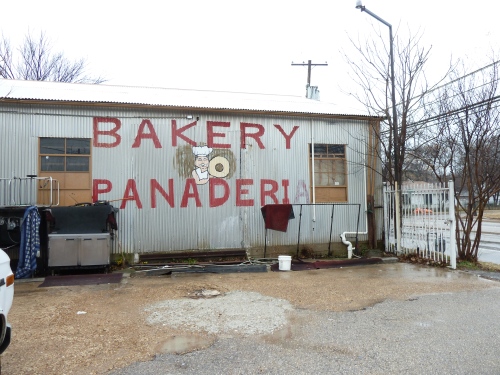 So, I ordered one of each only to watch the woman behind the steam table case disappear into the kitchen. A couple minutes she returned with two flour tortillas—not house-made (for which the woman apologized)—and, holding one at a time in her hand spooned a helping of refried beans on each tortilla followed by my choices. Aside from being something done in the Rio Grande Valley, when asked why she smeared beans on the tortillas, the woman  only said, “That’s how it’s done here.”

The beef, surprisingly, was better than the pork. The fajitas had a enough chew to be interesting and the lard in the fluffy beans balanced the sweetness of the peppers and onions. Unfortunately, my pork taco was a mushy mess in an decent mass-produced tortilla. 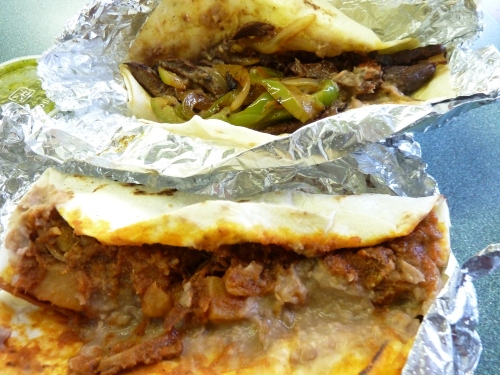 I’d like to believe that had we arrived an hour to 90 minutes earlier, the chicken wouldn’t have looked so dried, that the nopales wouldn’t have been as reflective as a car windshield sunshield, but the tacos aren’t the main attraction at Reveles. The pan dulce in the adjacent case are the real draw. Still, I’m willing to find out, especially if it comes with a warm concha.