With a name like Burritos Locos, I didn’t have high hopes for the Grapevine restaurant. Mentally ill donkeys, after all, seem better suited for a margarita-soaked refuge for co-ed buffoonery with a foundation of chile con carne than a restaurant offering solid tacos of suadero, trompo and hidago con cebolla. The latter being liver and onions.

I was pleasantly surprised by Taqueria Burritos Locos, not just because of the quality of the tacos but because finally I was able to enjoy liver and onions, mildly mineral in taste. The birria, however, was dominated by a metallic flavor.

The suadero offered chopped bits of crunchy and soft beef, while our selection of trompo was sliced thinly, bright and pungent. Burritos Locos’ chorizo, which, according to our waitress, is made in-house, is a fantastic choice. Spicy, it draws the insides of your mouth together as quickly as an infatuated couple reunited after spending only one night apart. 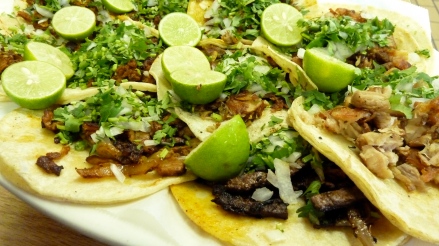 By the time I got to the lengua, the meat was cool to the touch. The lomo (rib eye), held in place by a frigid avocado wedge, was a rubbery disaster. Eating it first wouldn’t have made a difference. The carnitas showed no signs of being fried and could’ve used a roll in a saltcellar.

Still, the suadero, trompo and hidago con cebolla make Burritos Locos worth a stop while in Grapevine, especially if you’re in need of a nosh after an event at the Gaylord Texan or nearby Irving Convention Center. I can’t think of much better after a day of geeking out at Dallas Comic Con or beer geekery at Bluebonnet Brew-Off.