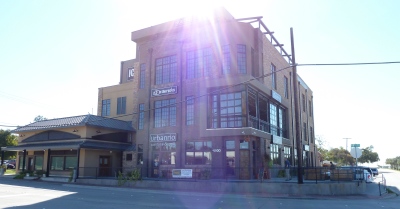 Mark Miller is to New Mexico’s cuisine what Stephan Pyles is to Texas foodways. Each is a big shot in the Southwestern cuisine movement that swept the country in the 1980s and ’90s. Pyles opened his latest restaurant, Stampede 66, in early November. This summer, UrbanRio Cantina & Grill, part of part of an entertainment and culinary complex in the Old Downtown Plano Ice House, seated its first guests within sight of the DART Downtown Plano station.

In the run up to Urban Rio’s opening, Miller was brought in as the consulting chef by owners Nathan and Bonnie Shea, who also own the Urban Crust pizzeria in Downtown Plano. His involvement in what was being billed as “Next Mex” had me excited. Recipes in Miller’s cookbook Tacos, are some of my family’s favorite and are in regular rotation at Casa Ralat. His The Great Chile Book is a concise, reference book. Then there was the fact that I could take light rail to its doorstep. Man, I was down right jazzed for a seat in its contemporary Rio Grande Valley-inspired interior.

So off I went from Dallas to Plano to meet a friend and hit up a couple of hole-in-the-wall taquerías before capping our day exploring a suburban taco scene at a well-received newcomer nurtured by a renowned chef. 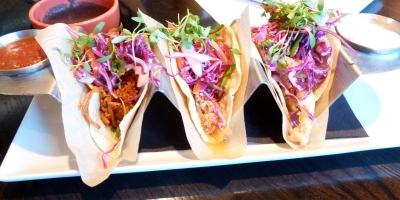 Urban Rio’s menu certainly shows Miller’s influence. Chilies are everywhere.  Chipotle gets marquee billing. There are cameos by pasilla and habanero. Serrano plays a small part, while jalapeño has little more than a credited role.

My friend and I struggled with our meal. Not because we were full but because our selection was a trio of disappointment—practically indistinguishable from one another—wrapped in mediocre house-made tortillas.

The protein in the fried corn-crusted fish taco was difficult to find under the garnish, a jalapeño slaw devoid of any heat. The chipotle aioli, a riff on the standard fish taco condiment, couldn’t salvage what wasn’t there.

Next up was a chicken tinga made from chicken breast. It had more flavor imparted by a one-two shot of chipotle-pasilla salsa, but not much more. The poultry was tepid and the grapefruit pico was missing.

The pork—carnitas—treated with more chile, was zapped of moisture and the promised onion and cilantro mixture was replaced by a hit of jalapeño slaw, where the namesake hot pepper could have been confused for bell pepper.

To say my experience at Urban Rio was disheartening is like saying I love tacos, I love my son and I love my wife. I wanted to love to Urban Rio’s tacos, too, what with the restaurants pedigree, location and promise.