The opportunity to munch tacos outside Dallas while on a camping trip with family friends and fellow taco enthusiasts, the Thompsons of TacOCliff, would not go missed. So, after breaking camp at Ray Roberts Lake State Park – Johnson Branch Unit, we stopped for lunch at Taco Lady, owned by legitimate taco lady, Luz Briseño, in Denton.

Tucked behind a laundromat and what looks like the stalled construction of a satellite snack bar to be operated by the taquería, Taco Lady isn’t easy to find. However, walking around the west side of the commercial strip and through the rear parking lot, gets intrepid taco lovers a treasure trove of $1.50 snackers in a tight dining room.

Before the goodies, though, are more obstacles. Scant more space than can accommodate the average-size human exists between the taquería’s counter and its front door. The next problem is securing a table to large enough for our party.

Only then are the exceptional tacos brought to the table. So much so, in fact, the missus and I went for a second round, throwing in a new option to our hearts and stomachs’ content.

The carne asada and carne guisada were tops. Rich, smooth and aromatic, they were worth going back for more.

The barbacoa, it was agreed, was a clean, satisfactory affair, albeit nuggets of shimmering fat. Had the asada and guisada not been stellar, the barbacoa would have been the superlative presentation.

The chorizo, a scorched, granular debacle, was barely saved by a brash flavor and fantastic hand-made corn tortillas (flour is optional but aren’t made in-house). The chicken fajita, dry but pleasing on the palate, was another letdown.

Better was the carne molida, assertive in its spiciness, finished off with a pork guisada taco, iridescent, with modest chile notes and meat that frayed delightfully. 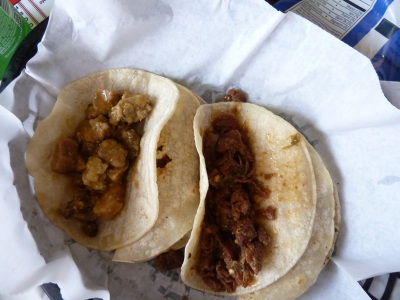 It was the salsa verde that David favored most above all other edible treats on the table. “I could drink the stuff,” he said, noting the sweet, bright quality of the condiment.

I was almost sated when we set off for home, passing by taquería after taquería on McKinney Street, wishing we had more time, gastrointestinal space and an agreeable child willing to tolerate his old man’s whim.

Oh well. Can’t win them all.