I don’t recall how I came across St. Tacos. I do know that from the McKinney taqueria’s Facebook photos, I needed to hightail it north on U.S. 75 at my first opportunity. The pictures showed a trompo, a spread of tacos and salsas so delightfully colorful you could read by them, not to mention the painted roads on St. Tacos’ floor.

Would the journey to St. Tacos end in a reward of cochinita so spot-on the achiote and sour oranges mistook the sides of my mouth for boxing gym punching bags? If I made my way to St. Tacos, would I be welcomed with pork sliced off a trompo like a casino card dealer’s flicks cards to the poor suckers with high expectations? Would the pork bear a protective, happy crust from its slow dance on the trompo and bear evidence of chile and citrus wrap? What of the barbacoa? Would it coat my stomach with stale canola oil?

The answer to the latter questions is a resounding “No!” The rest needs some explaining. St. Tacos’ barbacoa is a solid take on the classic preparation. It’s lean without losing body. There is no excess grease. It’s tried-and-true barbacoa through and through. The cochinita gets high marks for being the pugilist I hoped it would be. During my conversation with Eduardo Muensch, St. Tacos’ owner, the Mexico City native revealed how he prepared his cochinita (extended marinating isn’t involved) and where he learned the recipe (Merida, Yucatan). The bistec wasn’t pulverized, a travesty all too common in many area taquerias.

He explained why I, someone with a rare Catalonian paternal surname, had difficulty pronouncing his surname (it’s Miench.) And as it turns out, Muensch’s great grandfather volunteered to move from Syracuse, New York, to Mexico City, in 1898, for family business. The enterprise, Muensch told me, was candle manufacturing. “They shipped large amounts of church candles and votive lights (similar to what we know today as tea-lights) to Mexico for use in churches obviously, and in miner’s lamps, which were as much needed for lighting as they were a critical safety device, since oxygen is needed for the flame to burn. If the candles went out, the miners knew to get out of the mine.” That the family business involved miners in the late 19th century is auspicious. The first “tacos” or the food that we now call tacos were eaten by miners and were dubbed taco de mineros (miners’ tacos), after the explosives wrapped in a paper (known as a taco). Evidence suggests these original iterations were actually tacos de canaste (tacos steamed via their own vapor in a basket or other vessel).

Grandpa Muensch, as the man was eventually called, was 21 and single when he emigrated to Mexico. Porfirio Diaz was president. And, Muensch told me, his great-grandfather was to manage “the first candle factory ever built anywhere in Mexico.” He never left. 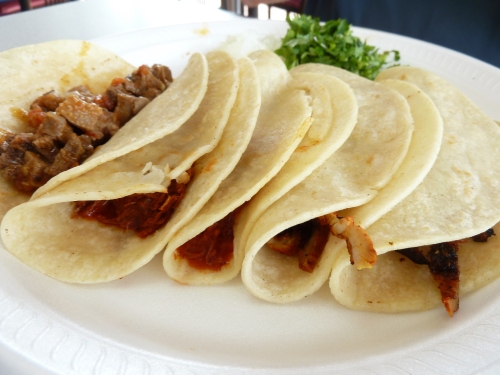 We talked about the mellow and sweet lengua a la veracruzana, given a gossamer blanket of tomato. We chatted about the trompo. Muensch explained why when I entered his taqueria, the vertical rotisserie was dormant and bearing a thin shaft of dried pork. St. Tacos isn’t busy enough yet to allow the al pastor to turn on the spit without ruining it, so it’s sliced on the trompo in the morning and stored for use throughout the day. Unfortunately, the pork in my taco al pastor was on the dry side. There was plenty of promise in each bite, though. The adobo used to season the pork was clean and tangy with hints of chile. This could be great pastor, if only more people ate at St. Tacos. With excellent lengua and cochinita pibil as well as good barbacoa and no-nonsense bistec, you have every reason to check out St. Tacos. Muensch recommends visiting Friday and Saturday mornings for the best chances at fresh tacos de trompo. And, in case you’re wondering, it’s Street not Saint Tacos, though Muensch won’t correct you. He likes it.