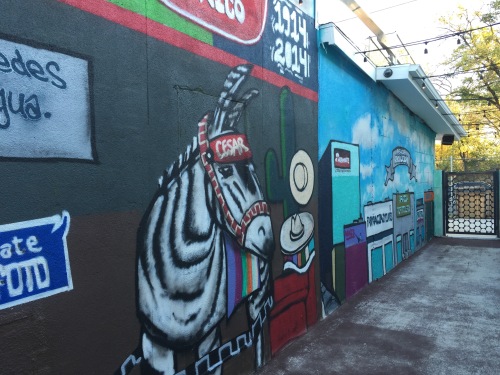 Cesar, the Tijuana donkey zebra, welcomes you to Tacos Mariachi.

For months I watched as demolition and renovation of the old Taqueria La Chilanga plodded along. I peeked in the windows, took photos, snooped (I mean, acted like a journalist), and waited. I got to talking to Jesús Carmona, owner of the restaurant replacing the husband-and-wife-run La Chilanga, and learned what was coming: Tacos Mariachi, a Tijuana-style taqueria. The idea excited me. In less than a year, Dallas had become home to Mi Lindo Oaxaca, an Oaxacan restaurant, La Norteña, a Sonoran-style tortilleria, and Resident Taqueria, a chef-driven Lake Highlands neighborhood spot. And soon, a joint would be slinging Baja California border-inspired fare, broadening Dallas’ taco diversity.

But I had to wait longer than expected. Tacos Mariachi’s opening was repeatedly delayed. My anticipation increased. The first opportunity I had, I bit into the seafood campechano, an octopus-propelled taco studded with juicy chopped steak held firm to a crisped flour tortilla by a layer of melted asadero cheese. Adding thin lines of tart salsa verde and fruity habanero-mango salsa transform the package into something as bright and playful as the patio mural honoring Tijuana’s iconic tourist attraction, the donkey zebra. The mural also includes cheeky statements like Hasta puedes tomar agua (You can even drink the water) and a streetscape representing the Mexican city’s Avenida Revolucion with painted structure outlines standing in for Banorte and Oak Cliff’s Araiza Tortilleria, where Tacos Mariachi gets its tortillas.

Araiza corn tortillas are made from fresh nixtamalized masa. They are fragrant and sturdy and deep yellow in color. They taste of corn, not the preservative-packed discs spat out by industrial factories for nationwide distribution. And they stay with you long after. Take a whiff of your fingers. Yep. That’s a cornfield, or what I call taco fingers. They’re the result of a truly happy meal that must include the lightly smoked salmon filet; the shrimp with a runner of cilantro pesto given heft and crunch with pile of julienned vegetables; the rough chopped pulpo and avocado between an asadero comforter and cilantro pesto shawl; and the Mazateño, Tacos Mariachi’s take on the taco gobernador.

Another shrimp taco, the gobenador was invented not at a restaurant in Baja California but at Restaurant Los Arcos in the Mexican state of Sinaloa. It was there in 1987 that the state governor’s wife requested shrimp tacos with tortillas that had grilled cheese. At Tacos Mariachi, crema fresca, pico de gallo, cabbage and salsa de chile de arbol add a balanced zing.

This is a power trio.

Then there’s the huitlacoche taco, an earthy composition of fresh corn fungus, corn kernels, cubed portabella mushroom, a cap of greens, and, again, melted cheese. It’s the stuff of life-giving earth, a reminder of the extraordinary born of the most basic elements.

This trans-border handiwork and creativity comes with impressive pedigrees. Chef Moises spent 16 years at The Mansion under Dean Fearing, while Carmona, a Mexico City native, worked for the Rosewood hotel chain, Café San Miguel, Knife and Spoon. It’s after time in Tijuana that he fell for the city’s varied and fresh fare, among them the hefty seafood tacos. That’s not to say everything coming out of Mariachi’s kitchen is a stunner.

The simpler tacos falter. Take for example, the carne asada, served as grilled beef cubes with sliced red onion and a large sprig of cilantro, are fine but nothing like the other options. The barbacoa spicy and red from a chile marinade is better.

The basic, more familiar options might not be as remarkable as the Tijuana-style specialties, but the latter, which—as you might expect of seafood—come with a higher price point, are worth the price. Think: Two large fresh tacos and a drink for about 10 dollars followed by a smile and tacos fingers. It’s a fine way to learn about what tacos Mexico has to offer beyond pork, beef, chicken and bland fish. It also makes for an excellent way to observe Lenten Fridays. One could say Tacos Mariachi’s tacos bring the religion.

One response to “Tacos Mariachi”