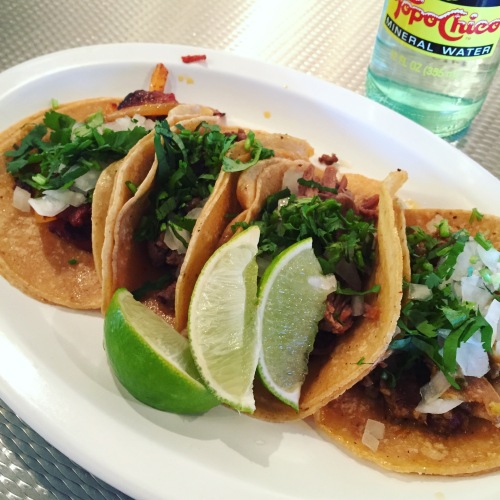 When a neighbor asked that I give Tacoqueta a second chance after the taqueria changed ownership as a replacement for Los Torres Taqueria, which closed in late November, I asked whether the tortillas were made in-house as they were at Los Torres. The response was “100 times cleaner, for starters.” Tacoqueta does not make fresh tortillas for its tacos (that craft is reserved for gorditas, sopes and garnachas). I wouldn’t call it cleaner than Los Torres either, as my follow-up visit to the taqueria was met with the stench of sewage mixed with cleaning solution unsuccessfully applied to mask the smell. It was strong. Thankfully, the salsa verde with spurs’ bite heat was stronger.

The salsa played well against the sweet barbacoa de res but coated the diced carne asada until the salty beef was almost nothing but pebbly texture. Better was the taco al pastor advertised as taco de trompo for a Taco Tuesday promotion. It was as if the spit-cooked pork wanted to have a taco de trompo’s throttled flavors but just couldn’t make itself be flashy. It’s only called a taco de trompo to play to the neighborhood with its paprika-worshiping northern Mexican population and myriad taco de trompo joints. Tacoqueta is a Veracruzan restaurant—not a place for Monterrey’s regional take on the taco al pastor. If the al pastor resembled any other regional style, it would be El Paso’s punchy version with its wide slices and a garish hue. Meanwhile, the soft chicharron was draped in a timid chile sauce.

About Tacoqueta’s tortillas. Freshly made handmade tortillas are considered the pinnacle of taco making. In today’s market who wouldn’t want a handcrafted, cooked-to-order food that flies in the face of greasy, chemical-tasting corn discs from multinational agribusinesses, especially one that forms part of the base of a nation’s identity? The former is what one received at Los Torres. The latter is what cushions the adequate fillings available at Tacoqueta.

If you want the good stuff, do not order tacos at the taqueria with “taco” in its name. Instead, go for the garnacha, an open-faced crisped corn tortilla slathered with a chile seco salsa that is then sprinkled with cubed white onion and fraying threads of beef barbacoa. It’s labeled as a must try item on the menu. I wish it had come topped with a queso fresco, as some regional Veracruzan variations do. The cheese would have added balance to the otherwise dry dish. Choose sopes, thick corn cakes capped with any of the available pork-beef-chicken options. Go for gorditas, rough textured open corn masa pockets. For novelty perhaps a Mayan Eggrolls platter is the dish to request. Be forewarned, though, what you’ll be ordering are a quartet of chimichangas.

Is Tacoqueta a worthy substitute for Los Torres? Is it better than the family-run Sinaloan taqueria that when opened sold one of the 10 best tacos in Texas? If you’ve read this far, you know the answer.