An Interview With L.A. Taco’s Blazedale

When it comes to taco hot spots in the United States, there is no spot more incandescent than Southern California, with Los Angeles as its bright center where every type of taco is seemingly within reach and where the taco’s boldface proselytizers congregate. Among them is the crew behind L.A. Taco, a website established in 2005 to shine the spotlight on all that is great in LA via the taco and taco lifestyle. The mission has resulted in a vibrant mix of urban photography, interviews with artists, musicians and writers. The latter has included taco scribes Bill Esparza, Gustavo Arellano and Jeffrey M. Pilcher. Along the way there has been plenty of fun, including a mascot, bracket-style competition Taco Madness and the contest’s subsequent taco festival.

That festival took place on April 20—the same day as the Taco Trail co-founded North Texas Taco Festival in Dallas, Texas. In the run up to our shindigs, L.A. Taco’s Blazedale and I struck up a correspondence.

We caught up with Blazedale again this week for a Taco Week interview.

Taco Trail: What was the inspiration for L.A. Taco?

L.A. Taco: L.A. is such a diverse city and while there are thousands of things which unite different communities, there are fewer which bring the city together. By far the tastiest of these is the taco. We wanted to create a place to document our favorite unsung parts of the city such as street art, dive bars, and of course tacos. At that time, these things weren’t nearly as celebrated as they are today.

LAT: To us the taco lifestyle is about getting out of the house and exploring your city. Checking out a new bar, an art show, live music, or hunting for a new taco spot you’ve never tried before. Finishing up a great night out with a taco is really the best thing ever, and an experience that is quintessential Los Angeles.

TT: L.A. is the taco capital of the United States. What are your thoughts on the rise of the taco across the country?

The Internet has played an amazing role in making this happen. Everyone who cares about what they eat loves authenticity. People weren’t going to bad Mexican restaurants because they like inauthentic food, they were going because those were the only options.

With the rise of specialty food sites, food photography, Twitter, etc., people know what authentic food looks like and tastes, and are demanding such options all over the country. It’s a great thing for Mexican food and for everyone who enjoys eating well. The taco revolution has just begun, even a city like Los Angeles still needs more and more high-quality taquerias and regional eateries.

TT: How did Taco Man mascot come about?

LAT: He was given to us by an aquiantence who visited the site early on and wanted to contribute something. At first we laughed at Taco Man (He’s a black bean taco with sour cream? WTF?) but soon we grew to love him. 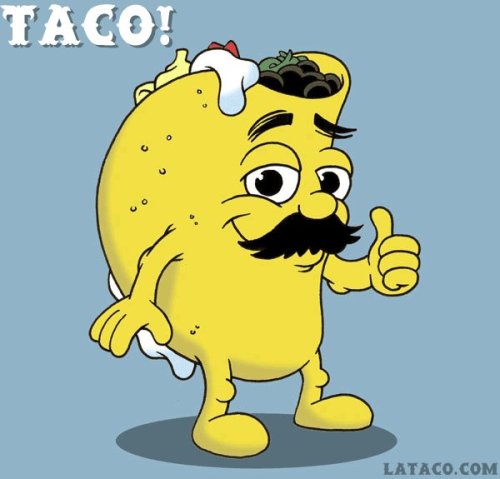 TT: How do you see him distinct from other anthropomorphic taco illustrations?

LAT: It’s the knobby knees that make it. And the dollop of sour cream falling out of his ass. Plus he has kind eyes.

TT: Taco Man seems to be everyone now? Has he appeared in any unexpected places?

LAT: He’s been all over the web, and is the Twitter avatar for approximately 5K Twitter users, including TacoJournalism’s Jarod Neese. We had a report from Utah that he had been integrated into a taco shop’s logo and signage, but no images have been seen. Earlier this year he popped up at Bill Esparza’s Tacolandia event as signage for one of the vendors there, which was fun to see.

TT: Are you surprised by his popularity?

LAT: Completely. We grew to love him, but on first look we thought it was against everything we stand for! But he’s a cool guy, despite having lettuce, and he deserves his fame.

TT: You recently uncovered what so far is the earliest recipe for a taco in Los Angeles. Did you set out to research it spurred by the work of Arellano and Pilcher or was there another impetus?

LAT: We interviewed Pilcher a few years back, and Arellano earlier this year. Both were instrumental in our research. In fact, we originally wanted to see Arellano’s evidence of the first ever use of “taco” in American letters for ourselves but were stymied, because that LA Times article is apparently not available online. We did find the same woman’s book that she wrote on Mexico that included some of the same quotes and was published a few years later. That made us wonder, what was the first use of ‘taco’ in a book since we already know the first use in print overall. Those men are actual taco scholars, we are humble Internet sleuths and leave it up to them to say what it all means.

TT: Five years ago, you established Taco Madness, a bracket-style L.A. taco competition. This year it evolved into a festival. When did you decide to jump into event production?

LAT: We did our first event in 2011 as part of a series of art events we’ve done with both photography and street are, which are the two areas we focus most on in the L.A. art world. At every art event we’d have killer tacos (We’ve had Rocio’s Moles de Dioses, Mexicali Taco & Co., and Guerilla Tacos, to name a few) so it was a natural for us to finally put together a taco-centric festival. The event was held at Grand Park LA and was a huge success! We drew over 3,000 people and every vendor sold out. Best in show went to Mariscos Jalisco, which wasn’t a huge surprise. We plan to repeat the event next year at Grand Park and it will be even better, with more live art and music, activities for kids, and a mobile art gallery/store in addition to our region’s best taqueros.

TT: So what draws you to tacos?

LAT: Tacos have pretty much always been my favorite food, but I have focused on them with regard to creating a site for Los Angeles because it seems obvious to me that the taco is one of the few things that really unites Angeleños. Everyone has their favorite taco spot, people love to trade information about where to get the best tacos, and the taco truck/stand/restaurant are some of the few public places in a car-centric culture where people from very different backgrounds come together.

TT: What marks a great taqueria and/or lonchera for you?

1. Authenticity—the taquero must respect the history of tacos and use the right ingredients in the right way. No mislabeling, misdirection or poorly thought out “modernizations.”
2. Creativity—the taquero draws from the inspiration of the past but also puts his or her unique spin on his food. This can be an old family recipe or a new technique, but a good taqueria or lonchera needs to set themselves apart.
3. Attention to detail—everything from the salsas to the level of cleanliness to the source of the ingredients, to the artwork to the name of the taqueria must be considered, and this is often what separates the best from the rest.

TT: What is/are your favorite taqueria and/or lonchera, and what do you recommend people order there?

LAT: I have a bunch of favorites that people can easily divine from the website and I’m always looks for great new spots. I don’t want to make a particular favorite but I love people like the chefs/owners of Mexicali Taco & Co., Guerilla Tacos, Mariscos Jalisco, and Punta Cabra because they put so much passion and hard work into their food. They make something simple look easy even though they spend insane hours developing their food. That level of craft and dedication is inspiring.

TT: What marks a great taco?

LAT: It depends on the situation but that first bite is paramount. A great taco delivers a rush of flavor that tells a story and makes you glad to be alive with that first bite.

TT: What would your dream taco be composed of?

LAT: As long as the ingredients are fresh and high quality, and the tortilla can match the filling, I’m happy.

TT: What taco would you request as a last meal?