Mike Karns has it made. In one corner—in one building, actually—across from the new Perot Museum of Nature and Science and a Frisbee’s throw from Klyde Warren Park, The head of Firebird Restaurant Group has three restaurants for three demographics. Anchoring the property is the de facto flagship outpost of the El Fenix chain. Next door, the second Meso Maya—the first is on Preston—offers chef Nico Sanchez’s gourmet Mexican fare for a chic set. Behind that, walk-up Taquería La Ventana serves classic tacos in tortillas made from nixtamal, for those who might only have enough time for a nosh at one of its outdoor tables. And for that, it’s perfect. Aside from food trucks, you’d be hard pressed to find such convenient and adequate grub at the border of Uptown and Downtown. Even if La Ventana’s menu contains offensive language (more on that later).

La Ventana melds highfalutin and populist. Brick and corrugated metal share real estate with paintings of Calaveras and a mural of a sexy señorita adorns the building’s rear wall. Strings of colored lights and papel picado add more visual appeal. But what’s most striking about La Ventana is it’s just good enough. That might have something to do with its pedigree. One lunchtime companion put it bluntly. “It’s OK. It’s corporate.”

La Ventana’s filling options are the same found in almost all other local taquerías. And the chicken, here suffers the same way most chicken tacos do: It’s dry. During three visits, the bistec, while flavorful, was also dry. The beef is pulverized to the point that before the customer is aware of its defects, he or she has ingested the bistec.

The suadero and carnitas had a nice crunch, and when shot with salsa verde each shined. However, not brightly enough to distinguish them from the suadero and carnitas of other restaurants. La Ventana’s pastor was dripping wet during one visit. It was fine during a subsequent lunches. Best of the lot, though, was the lengua, subtle, grass, nutty. Lengua, plain and simple.

It’s not that La Ventana’s food is bad. Not at all (except for the chicken). The food’s just not great. With more taquerías offering handmade tortillas or tortillas made from nixtamal as well as more adventurous cuts of meat, The food is merely reliable. It’s kind of place I’d return to when visiting the deck park or the science museum. And if I worked in the area, I might make the new taquería part of my lunch rotation—if it weren’t for the deliberately mangled English on the whiteboard menu. 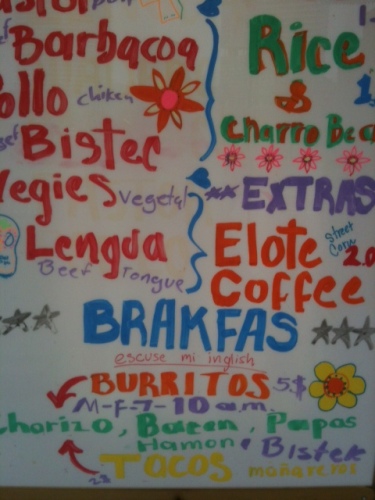 It’s offensive, embarrassing and racist. As such, I cannot, in good conscience, patronize El Fenix, Meso Maya or La Ventana.

As an astute reader pointed out, in my D Magazine article about my favorite taquerías, I described the cochinitia pibil at Café Maya has pre-Hispanic. While the spices and preparation of the iconic Yucatan dish are pre-Hispanic, pork is not. In fact, cochinita means pork. Much the same way that while pozole is pre-Hispanic, the Meso Maya’s pozole rojo is not. Why would I question a restaurant’s credibility if I’m equally guilty? My honest answer is I forgot what I wrote last summer about Café Maya’s cochinita pibil. For that I must apologize. Since then, I’ve learned so much more about Mexican food preparations, including pork. Because of the knowledge gained, I should’ve consulted my previous work. I did not. That was careless, and I regret it. This post has been revised to reflect that.