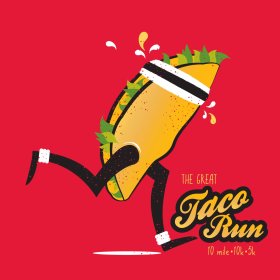 A different sort of taco trail is taking to Dallas on Sunday, Sept. 30. The Great Taco Run will give the city another race with another hook, yes, but can you think of anything more rewarding after giving it your all along the streets of the Big D than tacos? I can’t.

Presented by area sports store Luke’s Locker and benefiting the Trinity Strand and Katy Trail, the race will be separated into 5K, 10K and 10-mile lengths, all finishing at the Runners Village at Museum Way and Victory Avenue, near the American Airlines Center, where several taco vendors will be serving up their signature fare beginning at 8:30 a.m. Participants will be able to vote for their favorite taco vendor while a panel of judges will choose theirs. The winners will be announced on National Taco Day, Thursday, Oct. 4.

So far, Rusty Taco, Velvet Taco, Rock and Roll Tacos, Mattito’s Tex-Mex and Hacienda on Henderson have signed on as vendors.

Luke’s Locker marketing director Jayna Henstorf said, the team at Luke’s Locker came up with idea in January and knew they had something original to—if you’ll pardon the pun—run with. “There are so many races in Dallas-Fort Worth and tacos have never been done before. We also felt it was important to add a 10-mile course to cater to athletes training for fall marathons.”

More than 900 people have registered for the tasty race, Henstorf added. If you’re going to run, don’t run for the border. Run for local tacos and for the trails.

To register as a Great Taco Run racer or as a vendor, visit thegreattacorun.com.