Last week, I decried the fact that no food truck, much less a taco truck, was serving breakfast tacos. Then, I went to the Grand Prairie Farmers Market’s Hatch Chile Festival, hungry. There weren’t any taco trucks stationed on the west end of the market, but Taste of Home, a rig specializing in Chicago-style sausages, was selling breakfast tacos, Hatch chilies optional.

The line for the tacos was five deep. The number of people waiting for their orders was twice that, while the wait for said orders was 30 minutes. One woman paced, barely containing her exasperation. Shortly thereafter, her name was called with the wrong order repeated to her. She darted out of view when she got the correct tacos. But the natives were getting restless. Other customers grumbled. One threatened to demand reimbursement. Another remarked, “These breakfast tacos better come with gold plate.”

Unfortunately, Taste of Homes’ tacos weren’t worth my 20-minute wait.

My order of chorizo and egg and bacon, egg and Hatch chilies came with gummy, cool-to-the-touch tortillas. While the bacon didn’t disintegrate into salty shards when crunched down on, it was concealed bland chilies. The eggs, though, were smooth. 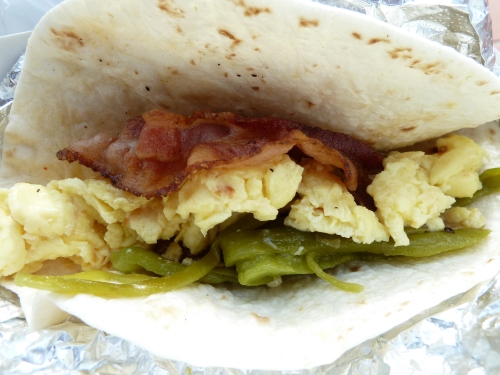 Little comfort, especially due to the inadequecies of my other selection, a bitter chorizo and egg taco in which the vermillion sausage was folded unevenly into the eggs.

To be fair, it was the first time the operators of Taste of Home offered breakfast tacos. They also cited later via Twitter that equipment failure contributed to the long wait. Why hadn’t they explained as much during the morning service?

This is Texas. Breakfast tacos need to be spot on straight out of the gate.

I hope that if/when Taste of Home makes another attempt at shelling out breakfast tacos, the level of improvement will erase the bad memory of the inaugural run. In the meantime, I’m waiting for one of our dedicated taco trucks to step up to the breakfast-taco plate.