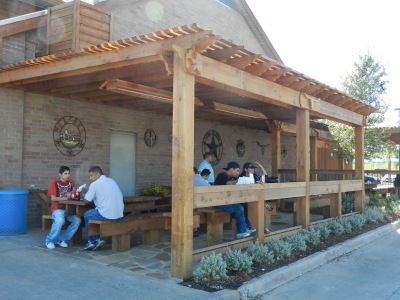 News that Fuel City, home of tacos with their own religious order, has added a covered patio (pictured) that can accommodate 70 customers appeared in my inbox this morning and all over Dallas food websites (Pegasus, SideDish, Eater). According to the press release, the tacos are made from recipes originating in Durango, Mexico, and passed down three generations.

My question is: Did the source recipes suck? The current iterations are terrible. I’ve called them the “Catcher in the Rye of tacos: over-hyped and underwhelming.” They remind me of the time when, as an infant, my son vomited all over my face and I inadvertently swallowed some.

The patio won’t make the tacos taste any better.