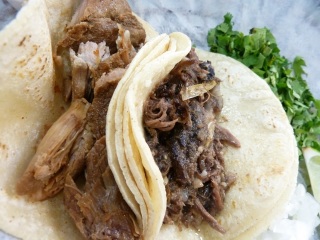 I live within walking distance of the old Taco King (the subject of the first Taco Trail), reported closed by my friends at Taco Sense last February; however, during an early morning bike ride, I saw that strange things are afoot in the old space.

The windows are covered in butcher paper while the periphery of the property advertises pozole, breakfast tacos and all manner of meat-related goodies from La Norteña. There may or may not be food available for sale inside the freestanding structure in the Little Five Points region between the Lake Highlands neighborhood and the affluent NorthPark area. Actually, there isn’t.

The windows are papered over because the space is being renovated, as the owner, Baldemar Martinez, explained when he politely shooed me away from the old Taco King and into the real shop, the original La Norteña, a butcher shop and bodega.

As I paid for my cabeza and carnitas tacos, Martinez and I discussed Taco King (“It wasn’t making money. I had to close it.) and his plans for the former restaurant  (I’m trying to get a Chinese place in there, something like First Chinese BBQ in Richardson. It’s my favorite.”)

Whatever the future holds for the dilapidated space, taquería operations have been moved into La Norteña. From a corrugated aluminum-framed kitchen come 99-cent tacos with fillings made fresh daily and soft, sturdy tortillas. The cabeza, exquisite in its fattiness, lingered hours later, grassy, rich. Fantastic. The carnitas, which flirting with dehydration, threaded at the weakest pressure with kicks of salt here and there. The salsa roja only improved the already wonderful pork.

I considered ordering a second cabeza taco, but left it for another time. Then, I’ll order the tripitas, carne asada, guisado de res and puerco, pastor and pollo. I’m also excited to try the breakfast tacos (chorizo or potato). If any of the aforementioned are as good as the cabeza and carnitas, my best-of list will have to be re-evaluated. Let’s hope so.